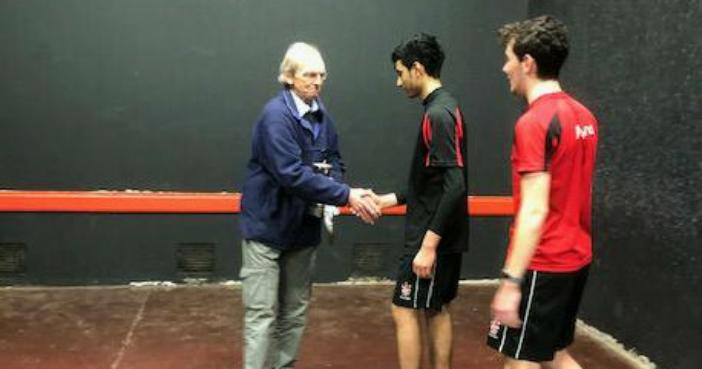 STOP PRESS:  This year’s West of England Schools Championships at Sherborne School were very closely fought, with no single player dominating in either age group and both singles finals going to three games. The Senior Singles was won by Raheem from Derby Moor Fives club, who played with impressive maturity and discipline to defeat the first, fourth and third seeds and claim the title. In the Senior doubles, Gwydion Wiseman (still an U16) and Prutthik Puvanendiran of Alleyn’s managed to close out the final in two games against Teddy Monro-Davies and Louis Odgers of St Paul’s. In the U16 Singles, Shiloh Wu of Winchester edged past Stuart Scott of Alleyn’s in a marathon three-game final.  In the U16 Doubles, it was again a Winchester v. Alleyn’s final, after two marathon semi-finals against the St Paul’s top two pairs. Wu and his partner Marcus Cloke-Browne managed to sustain enough hard hitting to defeat Scott and his partner Martha Nugent – last year’s winners – , creating a clean sweep at U16 for Winchester.

Tournament organiser Sam Roberts writes: The 2020 school Fives season got underway with the West of England championships at Sherborne School on 4th and 5th January. There was a healthy entry of 50 players across the Senior and U16 groups, with 8 schools involved altogether.

In the Senior Singles, Seb Fraser was the only one of the top eight seeded players not to reach the quarter-finals – narrowly losing out to Freddie Kottler of Marlborough.  The biggest upset came in the match between last year’s winner, top seed Gwydion Wiseman, and Raheem of Derby Moor.  The first game was won easily by Gwydion, with an impressive mix of power, finesse and varied shot play, but Raheem fought hard to stay in the match, saving match point and then taking the second game with some superb retrieving and ruthless precision with his right hand whenever he was given the chance.  Gwydion was clearly tiring in the third and Raheem kept finding the perfect length, emerging the winner.  In the semis, Raheem maintained his focus and accuracy against Dom Percival of Winchester, whilst in the other half of the draw Louis Odgers and Teddy Monro-Davies of St Paul’s battled through a gruelling high quality three-gamer, with Teddy eventually the winner.  In the final, Raheem was flawless in the first game against Teddy, hitting the ball crisply and cleanly.  In the second, Teddy started moving well enough to chase down Raheem’s shots and hit with more aggression, finding vital nicks on the side wall, but the effort took its toll and Raheem won the third game comfortably to claim the title.   The plate was won by Will Redgate of Tonbridge, who defeated his team-mate Ollie Knight in the final.

The semi-finals of the Senior Doubles involved four strong pairs from four different schools.  Teddy Monro-Davies & Louis Odgers of St Paul’s won a marathon match against Dom Percival & Seb Fraser of Winchester, after losing the first game.  The Alleyn’s pair of Gwydion Wiseman & Pratik Puvanendiran had an easier win against Dean Ali & Raheem from Derby Moor.  The final began as a one-sided affair, with the top seeds bombarding St Paul’s with hard, accurate hitting around the walls and some tremendous serving.  The second game was a classic, as Teddy and Louis soaked up the pressure, and Louis in particular started to find his range – with disciplined defence tight into the left corner and powerful winners into the back wall to get to game ball.  Alleyn’s held their nerve and closed out the second game by the narrowest margin, taking the title.  In the plate, the St Paul’s second pair of Ben Pymont & Shrey Bavisha won the final against the third pair of Nick Stanger & Guy Ward-Jackson – making fewer mistakes in the third game.

In the U16 singles, there were two tremendous three-game quarter-finals: Ben Harrison too accurate in the end for Ben Roberts, both from St Paul’s, and Shiloh Wu of Winchester surviving a fantastic fightback from Aiden Whitham of St Paul’s.  The final was another high quality three-gamer involving Stuart Scott of Alleyn’s, who had relatively fresh legs and too much power and precision for Ben Harrison in his semi-final,  and Shiloh Wu, who ran down everything his team-mate Marcus Cloke-Browne threw at him in his semi. Stuart started the final well and it looked as though Shiloh might have run out of steam at 5-1 down in the second, but he dug in and showed great composure despite being an U15, to take the second game.  The third game could have gone either way, but Shiloh managed to find a few more winners with his low penetrating hitting, to claim the title.  In the plate, Monty Brown of St Paul’s was too steady for Henry Akerman of Winchester in the semi, but could not find a way to combat Kaito Bremner’s clean hitting in the final, which went Winchester’s way.

The U16 Doubles, the semi-finals featured four strong pairs capable of sustained hard hitting, with both matches going to three games.  Stuart Scott &  Martha Nugent of Alleyn’s recovered from losing the first game to the St Paul’s pair of Ben Roberts & Aiden Whitham, leading to a fantastic decider which culminated in a series of long rallies with Martha returning whatever St Paul’s threw at her with interest, to take the match.  In the other semi, Ben Harrison &  Alex Ridley of St Paul’s pushed Winchester’s Wu & Cloke-Browne all the way.  After some loose shots from St Paul’s in the first game allowed Winchester to dominate, St Paul’s played a far more precise and tactical second game, leading to a see-saw third game which was clinched by Wu & Cloke-Browne.  After such tremendous semi-finalss, the final was relatively one-sided, with Winchester’s relentless power and precision too much for Alleyn’s.  Winchester’s second pair of Henry Akerman & Kaito Bremner were unbeaten in the Plate and were worthy winners.

As always we are indebted to Nick Scorer and Sherborne School for their generous and warm hospitality, and  I thank also Alex Wilson for running the U16 tournaments, and Ian Jackson and Rob Ody for helping out at critical moments. 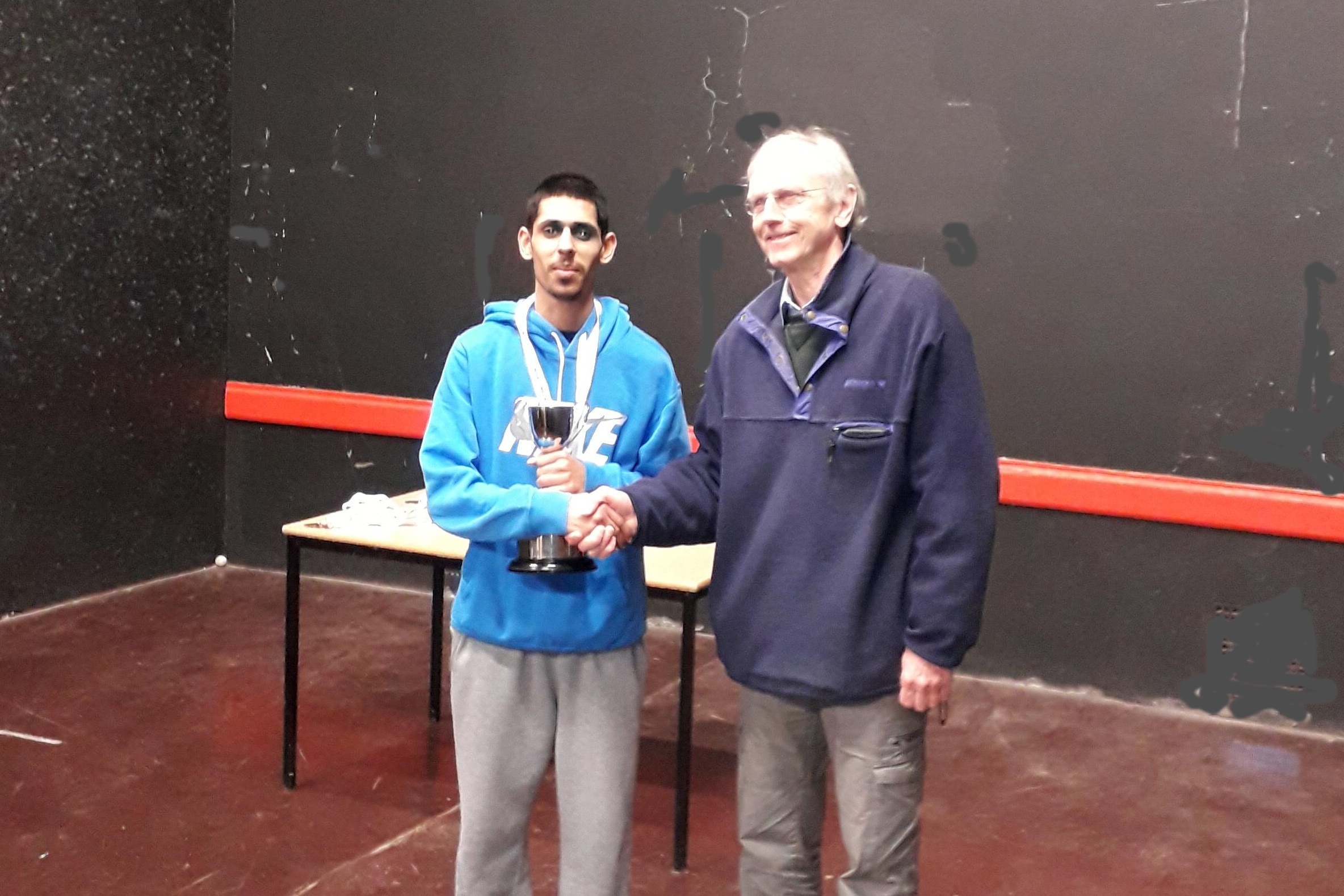 The U18 Singles champion from Derby Moor 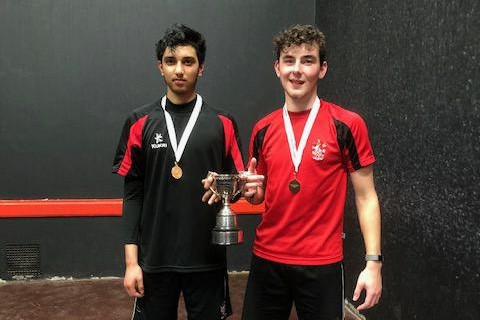 The U18 Doubles champions from Alleyn’s School 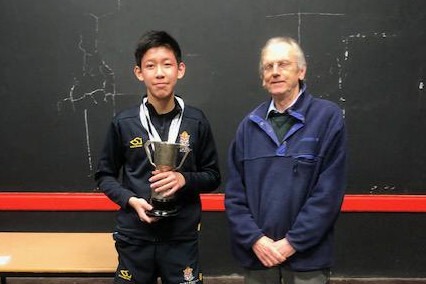 The U16 Singles champion from Winchester College 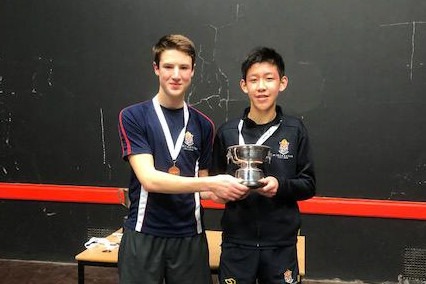 The U16 Doubles champions from Winchester College