On a long and gruelling weekend 18 players contested the West of England Singles and 17 pairs the Doubles at Clifton College. The weather was kind, the courts were clear and traffic conditions on the relevant motorways relatively benign. The early rounds of the Singles produced one upset and one close match. Jacob Brubert, leading a four-man Cambridge squad, knocked out seventh seed Chris Burrows in the first round, only to fall to the experienced Matt Cavanagh in the next, while Matt Shaw, now up at Cambridge after a year out, got the better of Tom Dean over the course of three games. The quarter-finals went according to seeding, but Dan Tristao had to extend himself to keep Ben Beltrami at bay. Will Ellison had a comfortable semi-final victory over four-times winner James Toop, but Dan T. had once more to fight to defeat Dan Grant over three draining games. Perhaps there was then no surprise on the Sunday morning when the final went to three games once more and defending champion Dan succumbed to Will Ellison 11-6 in the third. These two have now won the title alternately over the past five years. Next up the National Singles where Will will be hoping to complete the ‘Winter Slam’ (London, WoE and the Nationals) while Dan will be aiming to claim his second Jesters Club Cup.

The draw for the Doubles was swelled by the arrival of 6 players from each of DerbyMoorFives and Oxford University, four from the Deep West and Hamish Buchanan and Jez Sinton from points east. No surprises in the early rounds but Brubert & George’s win over Derby youngsters Goodwin & Whitehorn was not easy, nor was Tim Lewis & Stuart Watson’s match against the lone Marcus Bate (who then teamed up with Jez Sinton for the Plate once the ex-President had decided enough was enough!). In the quarter-finals Bristol University’s new pairing of Arnold & Parker pushed the defending champions Grant & Tristao hard. Both semi-finals went to three games, with an eye-catching performance from Beltrami & Shaw against Grant & Tristao and a devastating 11-0 from Buchanan & Ellison to put Dean & Kay in their place! By 7pm when the Doubles final began Dan Tristao had played 17 games over two days, several of them very demanding. The four people watching wondered whether he could maintain the necessary standard to hold on to the title. The final almost inevitably went to three games and if there was a deciding factor enabling the defending champions to hang on it was Dan Grant’s devastating serving and relentless volleying.

Alongside all the fireworks on the main courts the Plate competitions went their stately way. Both were contested as 7-man round robins, thus guaranteeing everyone value for money as is now traditional. Ben Beltrami and Theo Parker emerged from the pack to contest the Singles final, where Ben was able to add to his growing collection of existent and non-existent plates, while in the Doubles Anthony Goodwin & 17 year-old Robert Whitehorn could not find enough winners to get past the highly experienced Marcus Bate & Jez Sinton. 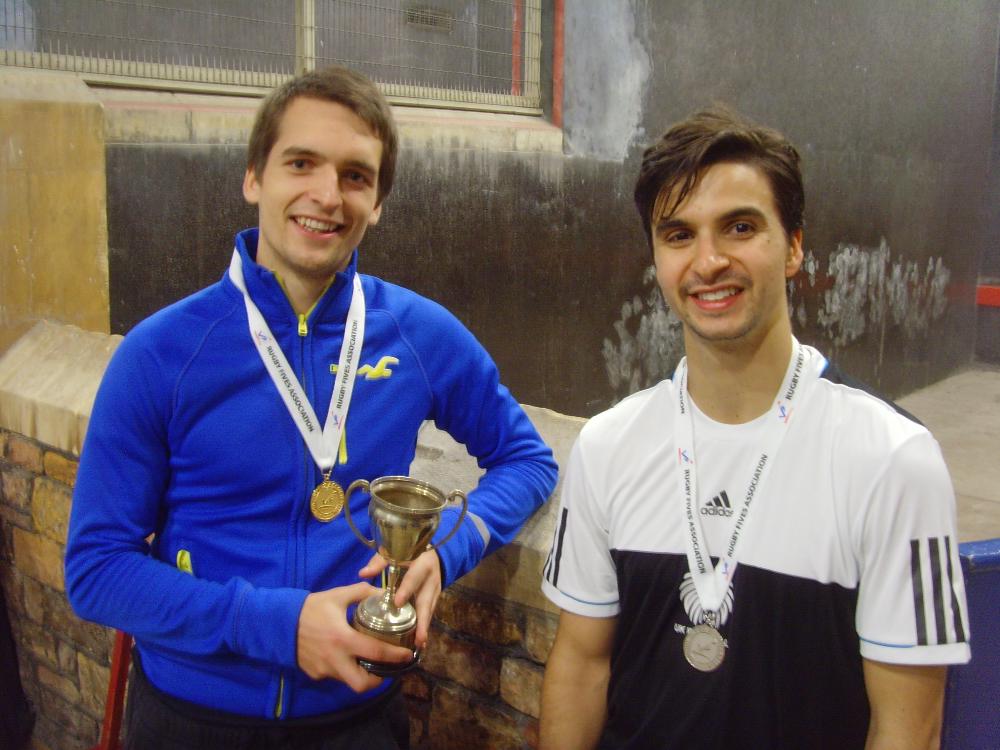 Finalists Will Ellison and Dan Tristao