STOP PRESS For the second year running the Ladies’ National Championships were played at Manchester, where the Y Club courts, currently in the process of refurbishment, once more proved a convivial home for this event. And once more it was Louise Mathias from Bristol University who dominated a young field of 16 players, winning the Singles final against the current Girls’ champion, Martha Nugent from Alleyn’s. In the Plate it was final-year Edinburgh Academy pupil Sophie Lundie who resisted a mid-game comeback by the Eton Fives convert from the City of Durham Club, Lizzie Ware. Both were hard fought matches.

In the Doubles the defending champions, Louise Mathias & Shinan Zhang from Southampton University proved too strong for the Oxford first pair Phoebe Thornhill & Viola King Forbes at the semi-final stage but were pushed all the way in the final by a new pair, both schoolgirls: Martha Nugent & Katie Sumner. In the Plate an all-Edinburgh Academy tussle left Sophie Lundie and her partner Flora Millar bitterly disappointed, losing in three games to the improving Louise Hawkins & Ailsa Calder after having beaten them in their pool match.

Organiser Louise Mathias reports:  Establishing a new tradition, the Ladies’ Nationals was once again held at the Y Club in Manchester over two days. The event brought together ladies and schoolgirls from all over the country, with many new players on the scene too. It was hugely fun weekend packed full of competitive, enthusiastic and very high quality fives.

The excitement and enthusiasm for the day of Singles was apparent right from the beginning, with the Durham girls ready and warming up 20 minutes before the 1st round matches were due to start — an organiser’s dream! So with no hanging around, the singles got going, with all main draw matches best of 3 to 15. Some close games were seen here, with two ladies beating their higher ranked opponents. Sian Tustin played some great deep shots to beat Sophie Lundie 15-7 15-9, whilst on the court next door Ailsa Calder had some very long rallies against Julie McIntyre, the final score being 15-4,15-7.  Sian and Ailsa then joined the other top six seeds in the quarter-finals.

The stand-out game in the quarters was without a doubt that between Camille Beattie and Shinan Zhang. Playing for over an hour and a half, Shinan and Camille battled it out with long rallies and excellent retrieval, neither player getting ahead by more than two points throughout. Shinan managed to push ahead, taking the first game 15-13 but Camille was ready to fight back and led the way in the second game. Unfortunately for her though, a few down serves in a row meant she could not quite hold on to her head start and eventually Shinan took the second game, again by a close 15-13 to make the semi-finals. Fantastic play by both! In the other quarter-final games, Katie Sumner played some great winners in her game against Phoebe Thornhill. Despite some solid defence by Phoebe, she found herself struggling with sliding around on the particularly shiny courts. The final score was 15-7,15-0 to Katie.  Louise Mathias and Martha Nugent also comfortably won their games to join Shinan and Katie in the semis.

Attention then moved on to the Plate games which was in the format of two round-robin groups. This produced some really close, competitive games. Particularly, Alley Scott played a great game against Jan Hutchinson, winning 15-11. Sophie Lundie and Lizzie Ware were also very evenly matched. Battling it out in a very long game, Lizzie eventually had the edge to win 15-13. In the second group, Julie McIntyre beat Louise Hawkins in another close game by 15-14 but just lost out to the winner of the group, Viola King Forbes 15-8. The top two players from each group then went through to the plate semis; Lizzie Ware vs Julie McIntyre and Sophie Lundie vs Viola King Forbes. Wins from Lizzie and Sophie in the semis led to a spectacular rematch for the final, which took place the following morning. This proved just as long and competitive as their first game, but this time it was Sophie who came out victorious to win the Plate. Well done, Sophie!

Back to the main draw semis, Louise Mathias secured a win against Katie Sumner 15-2, 15-0 despite some great retrieving and movement by Katie. Shinan, after some recovery time from her epic quarter-final, took on Martha Nugent. This was another fantastic game to watch with both players moving each other round the court really well. Martha remained very consistent and found some lovely nicks to take the win 15-7, 15-7. A great way to conclude the first day.

A lovely evening with all the players was then spent at Tampopo,with everyone having a chance to relax and recuperate after a busy day. The next morning started with the Singles final between defending champion Louise Mathias and first-time finalist Martha Nugent. With strong hitting from both players, this was a very exciting game indeed. Since meeting Louise just a few months before in the U23s final, Martha had upped her game and showed some fantastic volleying at the front of the court. Despite this, the experience of Louise paid off, and managing to keep the ball tight to the side walls, she defended her Singles title, winning 15-4, 15-5.

The Doubles then got underway with two round-robin groups. Defending champions Louise & Shinan came out top of their group followed by Durham pair, Sian & Camille. In the second group, it was the new partnership of Martha & Katie who comfortably won all their games, followed by Oxford pair Phoebe & Viola. Into the semis, the top seeded pairs showed their dominance on court and found themselves easily into the final: Louise & Shinan beat Phoebe & Viola 15-2 15-0, whilst Martha & Katie secured a 15-2 15-5 win over Camille & Sian.

Over to the Doubles Plate, where Edinburgh Academy pairs Sophie & Flora had a highly competitive group game beating Ailsa and Louise Hawkins 16-14. Both pairs showed great determination but at times disagreements over lets resulted in tension building between them. This followed into the Doubles final where the two pairs met again. Playing best of 3 to 11, Alisa & Louise took the first game 11-5. Sophie & Flora then came back with even more fight to take the second 9-11. Down to the final game, it was evident just how much both pairs wanted to win. In the end, it was Ailsa & Louise who came through to win the plate the final score, 11-5, 9-11, 11-9.

For the main draw final, Louise & Shinan looked to defend their title against the new partnership of Martha & Katie. Some lovely play by Shinan, jumping in with volleys and finding some nicks, helped the defending champions secure the first game 15-8. In the second, Martha provided strong, consistent shots and this combined with some great retrieval from Katie they pushed Louise & Shinan to look for new tactics in their game. However, Shinan & Louise held on well to take the match and the National Ladies Doubles title for the second year in a row, the final score 15-8, 15-11.

Many thanks to all players! It’s fantastic to see such a high standard of ladies fives. I very much hope to see many of you in the open tournaments coming up, as well as the ladies events! Thanks also to Julie McIntyre, who helped with organising the day and to Gareth Price for the facebook live streams! 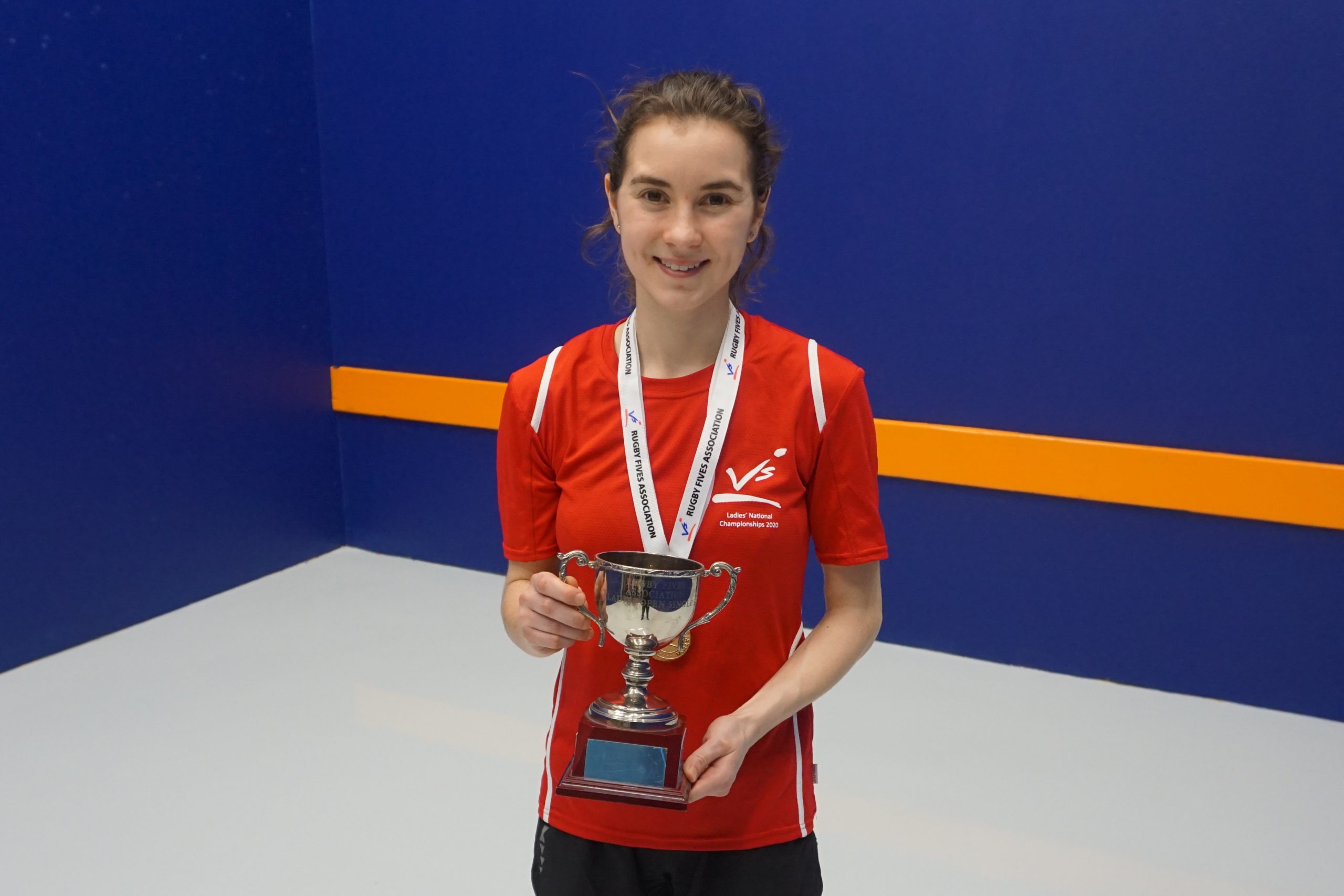 Top seed, Nr 1 in the country and champion once more 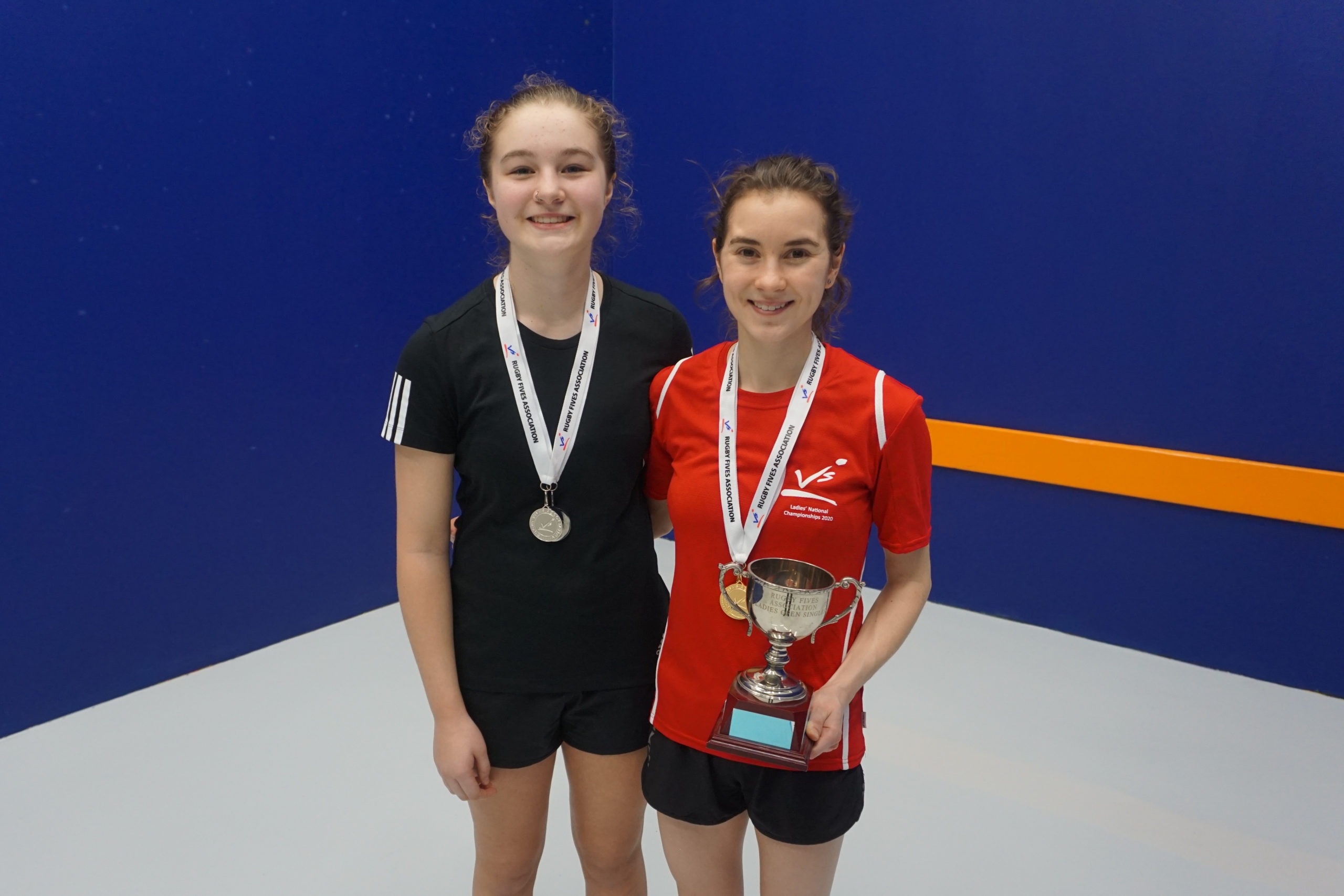 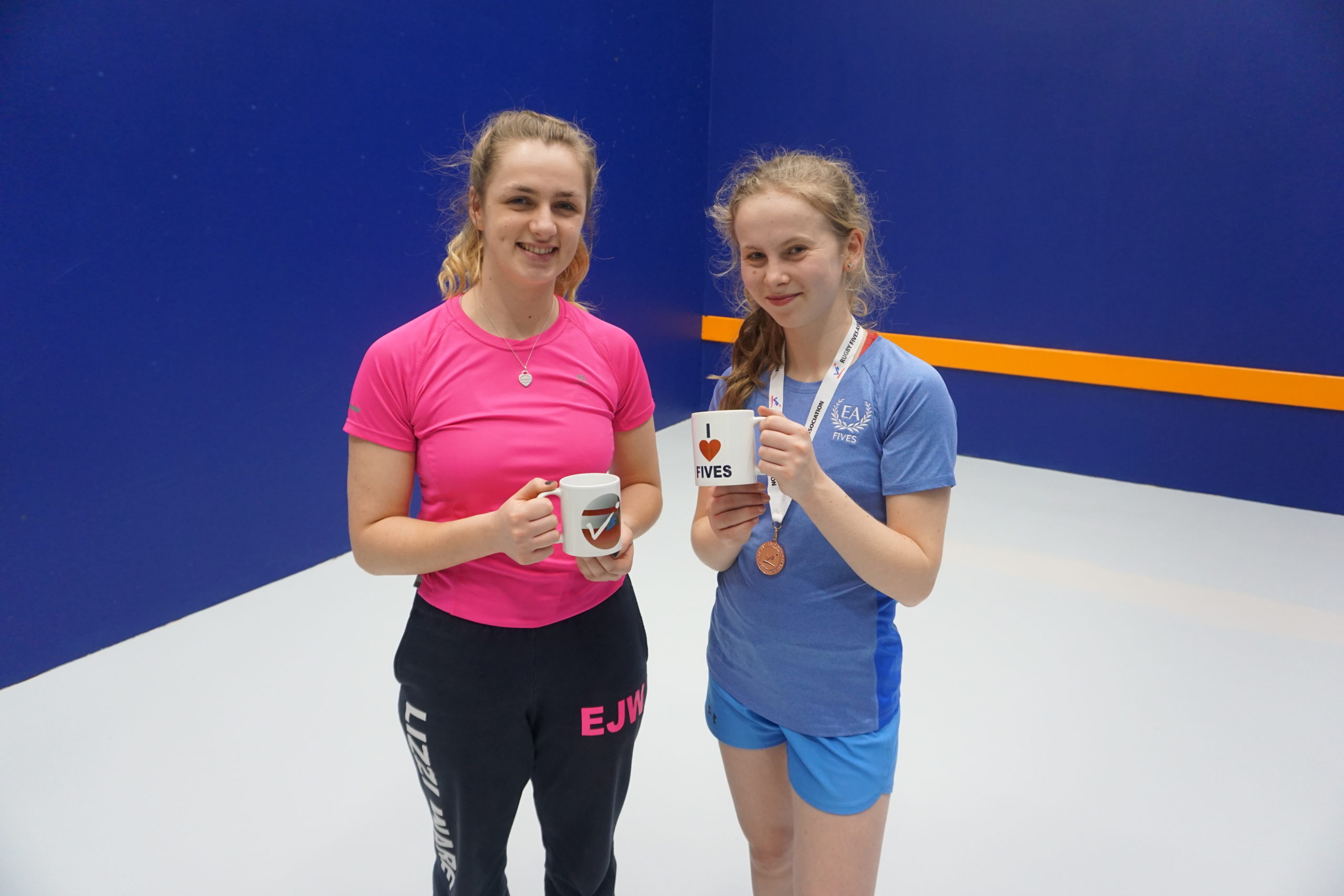 The Singles Plate finalists from Durham and Edinburgh 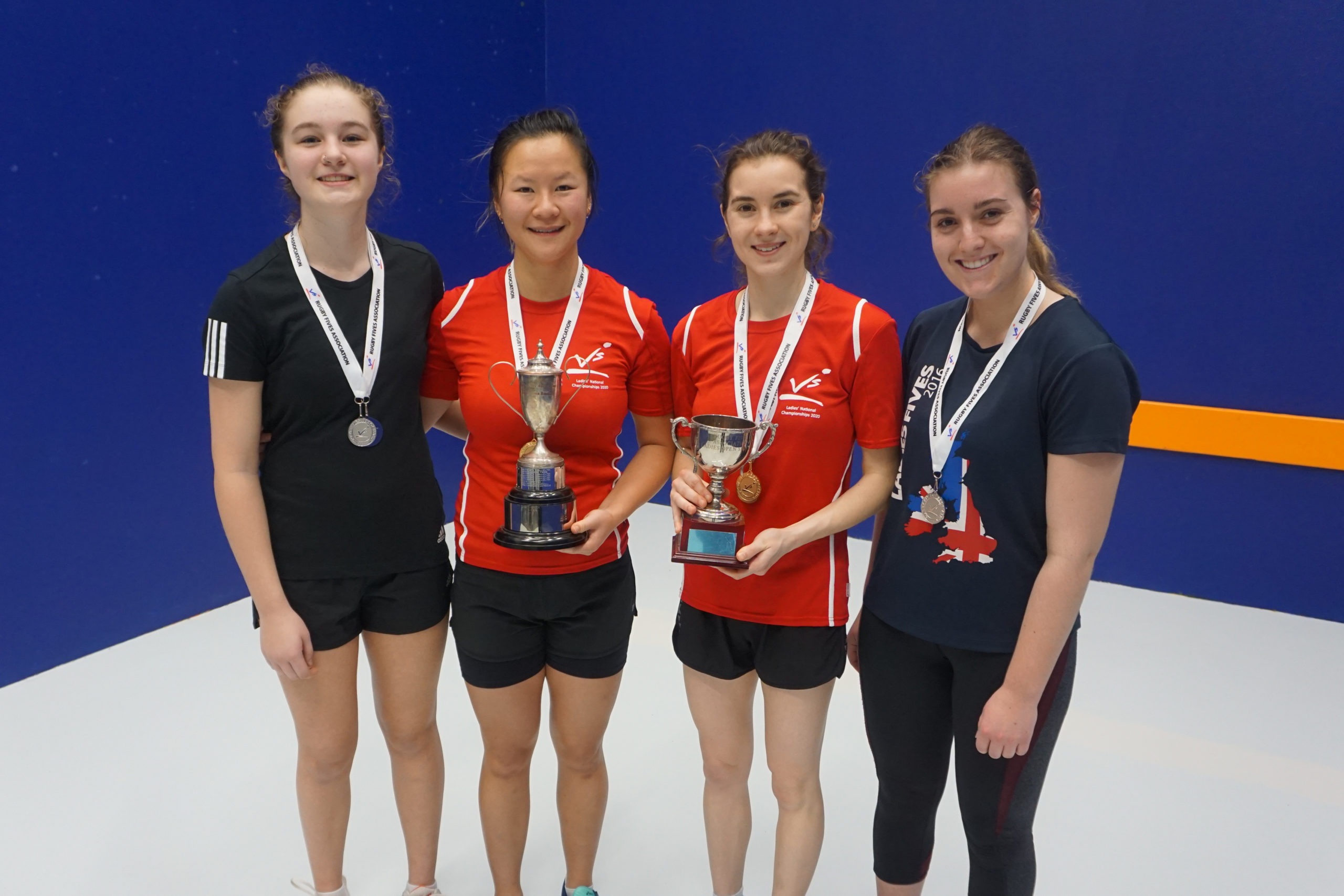 The Doubles finalists – from London, Southampton, Bristol and Bedford 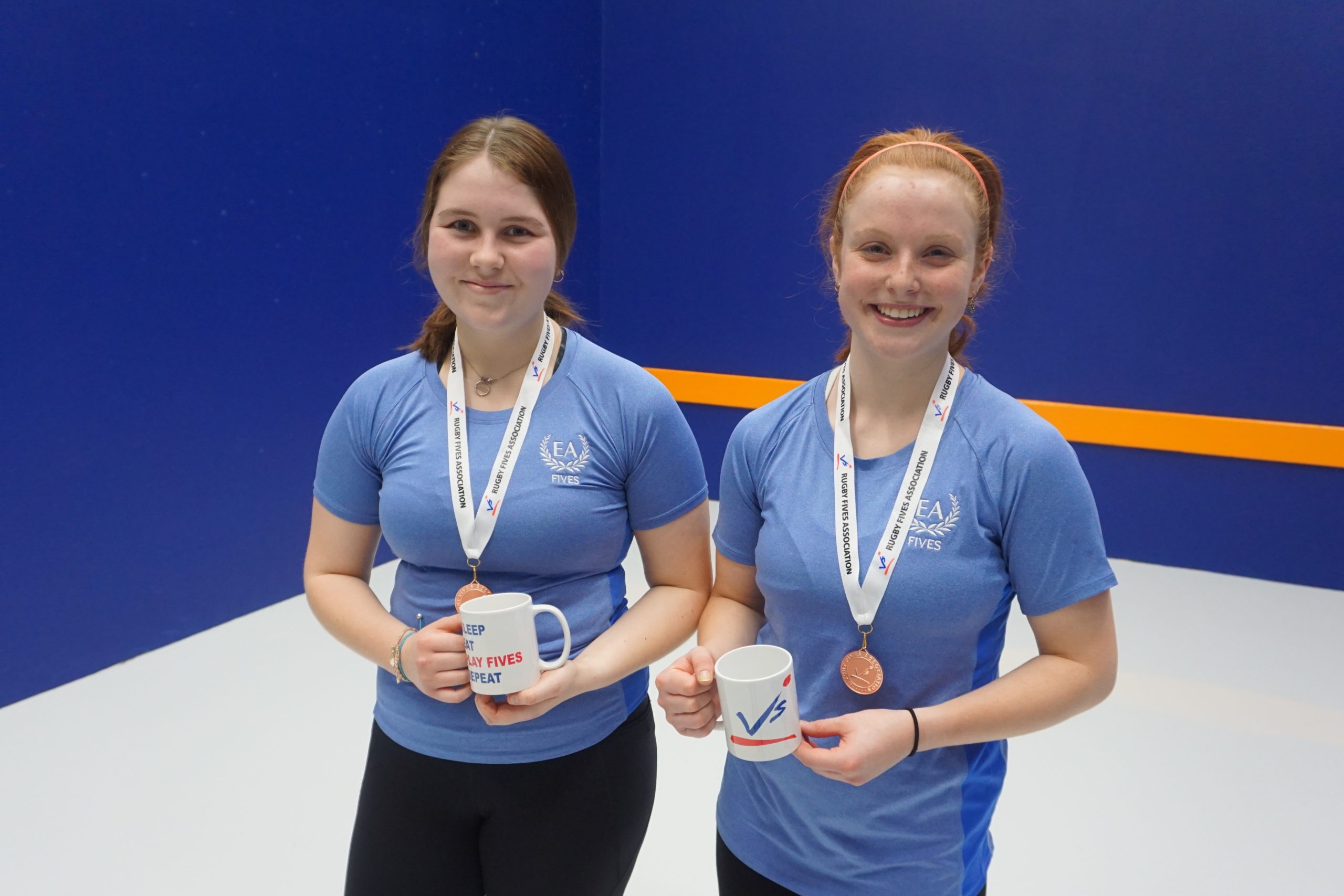 Plate-winning pair from the Edinburgh Academy 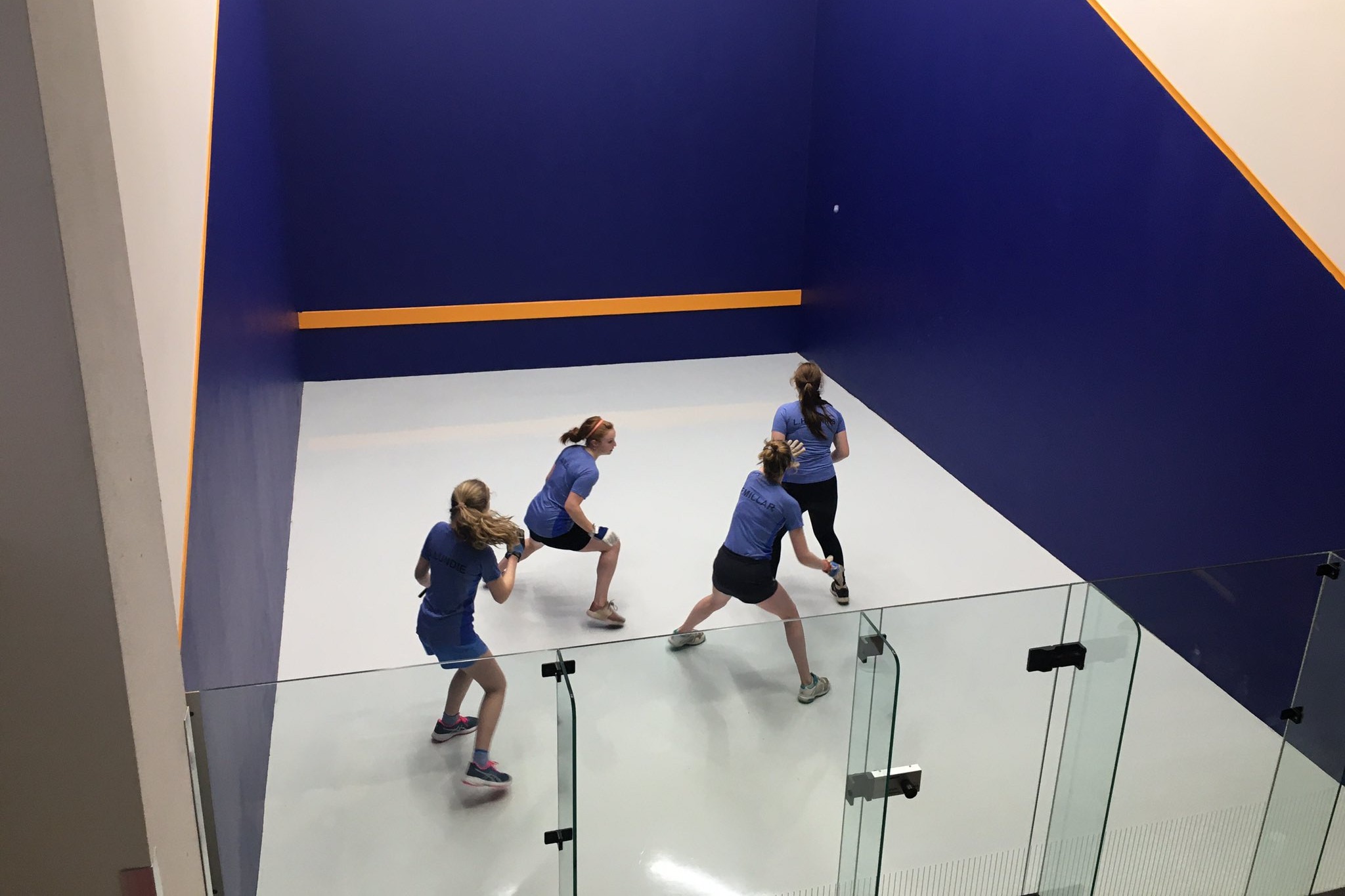 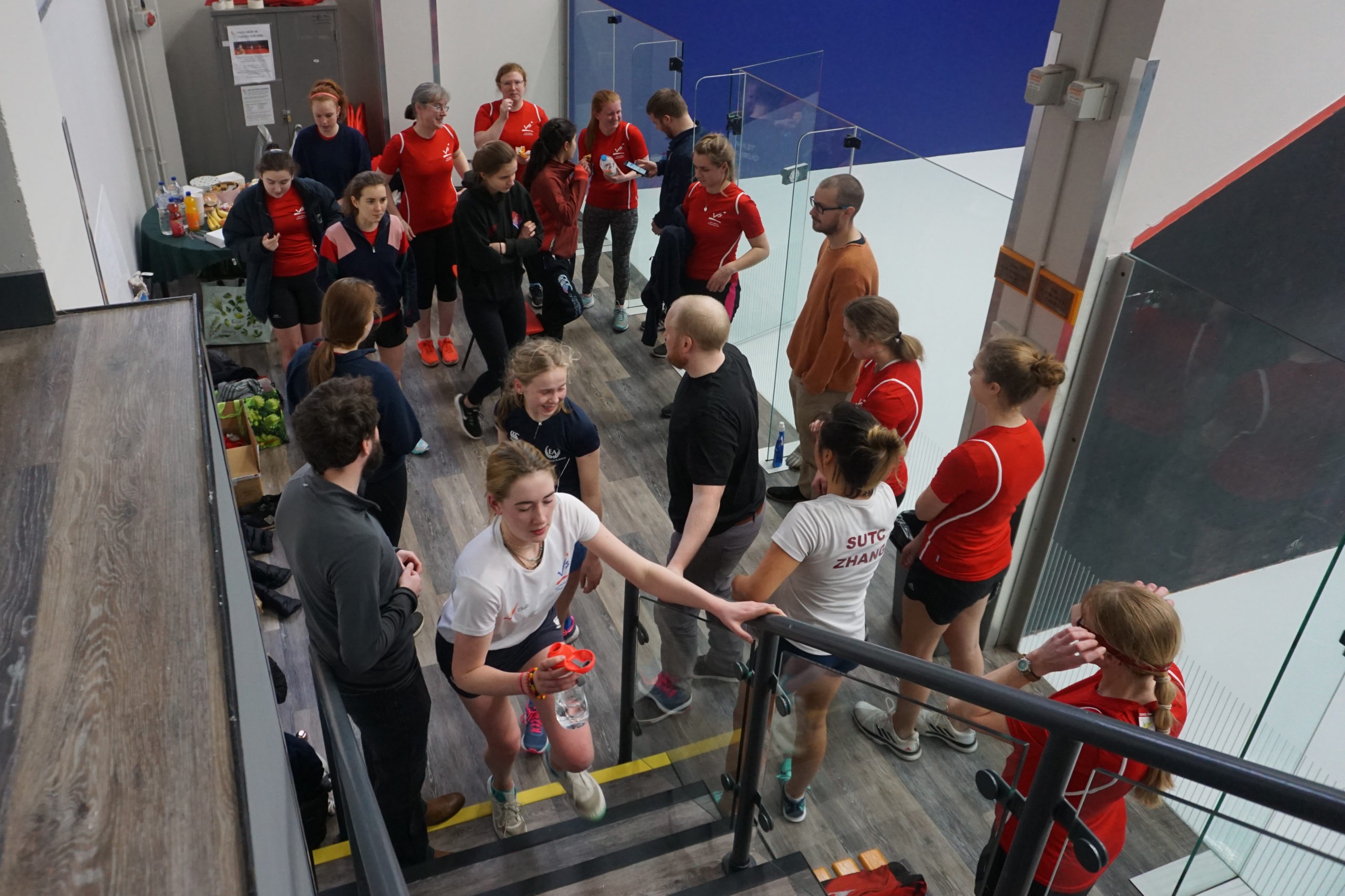