STOP PRESS This year’s competition was dedicated to the memory of Tim Lewis, who died in June. Ed Kay successfully defended the Singles title he won in 2019, beating Will Ellison in the final. Will partnered Charlie Brooks to win the Doubles against Kay and Dave Butler. In the two Plates Joe Sumner defeated Lewis Keates in the Singles, while Lewis then paired up with Bally Singh to beat Joe and Addie Chai.

Organiser Wayne Enstone reports: This year’s 38th Championship was very special in several ways, it being the first Championship for two years and held in memory of Exeter Fives Club Legend Tim Lewis.

Despite having to move the date back we still had an entry of some 32 players, with six players in the top ten of the National Singles Rankings playing in the Singles. There was a mixture of youth and experience, plus National Ladies Champion Louise Mathias, and former National Ladies Double Champions Maddy Raynor and Alexandra Steel — a wonderful mix.

In the Singles first round there were some fine performances considering there has been no competitive play for almost eighteen months. This set the scene for the rest of the day, with young Blundell’s sixth-former Ed Swarbrick taking experienced Dan Sorensen to the first three-gamer, to be followed in the second round by Old Blundellian Addie Chai taking Dan Grant to another three-gamer, and a quarter-final where DG had three wonderful games with Tom Watkinson, with Tom edging into his first semi-final at these championships and upsetting the seedings. Another seed upset saw a revitalised Charlie Brooks turn back the years to beat Dave Butler in two hard-fought games for a place in the semi-finals. In the other quarter-finals one felt for Sam Russell as he competed in most rallies with Ed Kay; however, Ed produced endless winning shots to shut the door on that challenge, as did Will Ellison in beating a lively Matt Shaw. Both semis were played after the Doubles semis, which was the players’ choice, with Tom Watkinson blasting away against a very sharp Ed Kay, Ed again winning in two entertaining games. Charlie Brooks had his moments of success in the other semi-final; however, Will held off the challenge and came up with his big shots to end what had been a great day of fives in the main competition.

The Doubles began at mid-day, with two three-gamers in the first round, Chris Davey & Dan Sorensen just edging it over the very experienced Nick Geere & Stuart Watson, 11-8 in the third. Cameron Low & Louise Mathias similarly beat Richard Christie & Stuart Kirby 11-7 in the third. All the seeds went through to the semi-finals reasonably comfortably with the exception of Dan Grant & Matt Shaw, who took three games to beat Louise Mathias & Cameron Low. One may have thought Bonfire Night had come early in the first semi, with Tom Watkinson rocketing the ball about against big-hitting Charlie Brooks & Will Ellison, Sam Russell playing the back-up role with Tom, with some quite remarkable play; however, Charlie and Will proved too strong eventually and won through to the final. In the other semi, Dan Grant, struggling with a back issue earlier in the day, had a superbly mobile Matt Shaw as a partner, which helped them push Dave Butler & Ed Kay to three games, with Dave & Ed holding steady to win the third 11-6 and take their place in the final on Sunday morning.

The Plate competitions finally started well into the afternoon, which resulted in a very late finish, gone 9 o’clock in the evening. Congratulations go to Joe Sumner for beating Lewis Keates in a real cliffhanger in the Singles final, 16-14. In the Doubles final, Lewis and his partner Bally Singh powered their way to a very convincing win against Joe & Addie Chai 15-3.

RFA President David Parlby came along on Saturday to support and watch, and commented how impressed he was with the high standard of play shown in both Singles and Doubles. David won the South West Doubles back in 1987 — how time flies!

Alexandra Steel very kindly organised the Saturday evening meal for us at a new venue, which proved most successful and was certainly well supported. As usual competitors and spectators could have a good relax and catch up with old friends, making the championships a real social occasion.

On Sunday morning the Singles final began, with Ed Kay wanting to retain his title from 2019 and Will Ellison wanting to win his eighth. Both players attacked each other from the start, winning alternate rallies with the score on love all for the best part of 10 minutes. The quality of play was magnificent. Ed just slowly started edging the rallies with a mixture of his clinical wall shots and deft angles, and at 7-2 to Ed it looked an uphill battle for Will. Despite Will’s determination and excellent play Ed started to dominate the rallies, winning the first game 11-6. The second game presented a similar picture, with Ed looking more invincible as the game progressed. At 2-9 down Will did hold Ed up with a mini-revival; however, Ed managed to hold off Will’s challenge and emerged a very impressive winner, successfully retaining his title.

In the first game of the Doubles final Will Ellison & Charlie Brooks hit their usual former National Doubles Championship form, taking a 5-0 lead; however, Dave Butler & Ed Kay eased the score back to 4-6 down. Using their experience Charlie and Will appeared to inject even more pace into their hitting and began to dominate once again and closed out the game out, winning 11-4. The second game was quite the reverse of the first, especially with Dave hitting several winning shots in a row to help take Ed and himself into a quick 7-1 lead. Question for spectators was Would this match be a three-gamer? At this point Charlie Brooks hit a series of blast angle shots that brought Will and himself back into the game, still 4-7 down, only to see Dave and Ed move to game ball at 10-7 and looking set for the win. Not the case in Charlie and Will’s minds obviously, as they kept their nerve and after several hard-fought rallies and multiple winning serves they managed to recover to make it 10-all. Unfortunately, the game ended surprisingly quickly as Ed attempted a winning serve that just clipped the board, giving Charlie and Will match point. which they took to win the game 12-10 and seal victory.

Whilst the finals were being played Alexandra Steel organised twelve other players to compete in the fun American Doubles Tournament. After many close games, Alexandra & Matt Shaw took home the local Dartington Glass trophies — well done to them all for holding up after playing every pair, five games in two hours’ play — wow!

As usual, Trophy Presentations took place for the Winners and Runners-up. However, it felt this year that all the players who competed were winners in the sense of being back on court at long last. Well done then to all. Another great Championships on and off court. Here’s to next year, all welcome.

Thanks go to: Alexandra Steel, our social meal director plus performing multi organisational roles, and to mum Caroline; to Lesley Enstone, Catering Manager; to Blundell’s School staff for opening doors, cleaning courts and general administration; to Matt Shaw for entries and publicity and for performing multi-media roles with Sam Russell and Dan Grant, all of which kept those not in attendance informed throughout the two days; finally to Howard Wiseman, via Dominique Redmond, for producing an excellent standard of ball for this year’s championships.

Lastly: TO TIM LEWIS — we all missed his usual laughing on and off court, for sure! 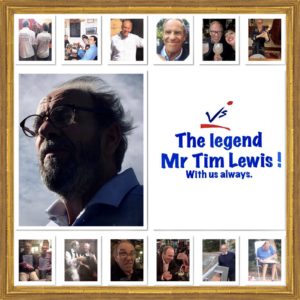 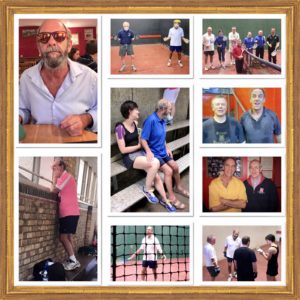 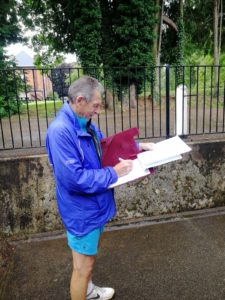 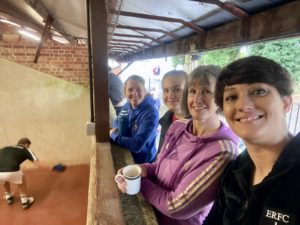 4 of the 5 lady participants 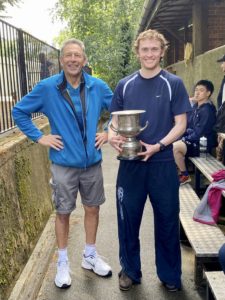 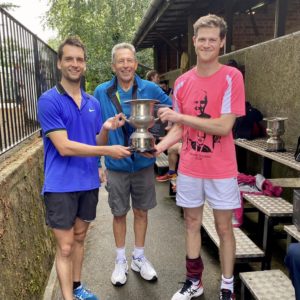 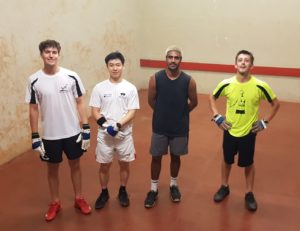 The Plate finalists for Singles and Doubles – Sumner, Chai, Singh and Keates 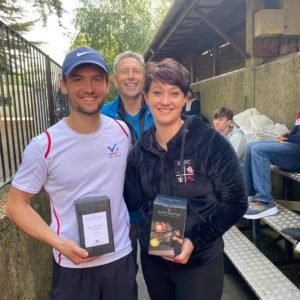 The American Doubles champions – by 2 points! 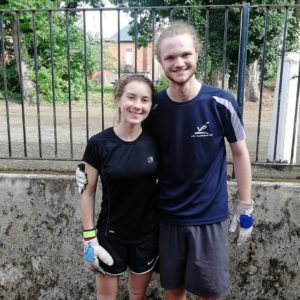 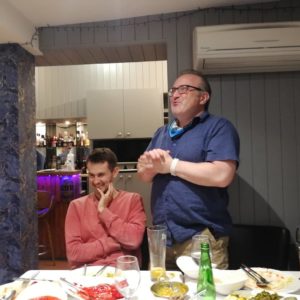