Organiser John Hawke writes: After the usual intimidation by the organiser, an excellent entry was forthcoming for the tournament. Unfortunately, he had obviously not put as much effort into control of the weather, so an extremely wet Friday coupled with a rapid increase in temperature left the courts in poor condition. Cover had been arranged with Manchester to use the Y Club courts, but luckily the Derby Moor contingent, including one R Dolby, had failed to realise that the tournament start time had been set later than in previous years. Their arrival some two hours before the intended start, their hard work with brooms, newspaper and tissue, and the usual late arrival of all other entrants meant that play was possible as soon as competitors were ready.

Although the courts were slippery in places, matches were played with the usual enthusiasm in the first two rounds of the cup, and in the plate competition. Most players managed to avoid the slippery areas, and those who failed in the main managed to keep their footing. The one exception was Richard Christie, who seemed to spend a fair amount of time lying down, luckily with no reported or visible injuries. As the afternoon wore on, the playing surface deteriorated, so the decision was made to exercise our option on the Y Club courts for the Sunday and play the doubles cup semi-finals and finals there. As soon as this arrangement was made, however, part of it was reversed when it was realised that Neil Roberts would have to travel to Manchester for a single match (he had decided not to enter the Singles) which, form indicated, his partnership was unlikely to win. With the agreement of all involved parties, the one semi-final was played. The form book did not lie.

Plate players are made of stern stuff. Throughout the afternoon, the plate took place with no moans or mishaps. All losers up to and including the semi-finals were eligible. The eventual winners were Hawke & Roberts, overcoming Geere & Sandie in the final.

After a superb evening in the Hart’s Head, where the staff always seem to manage to arrange a huge table to accommodate all the players, the entourage moved on to Manchester for the remains of the doubles and for the singles. Start of play was initially set at 9 o’clock in order to complete the doubles before the singles got underway in earnest. This caused problems with the breakfast time at the Hart’s Head, so tripartite negotiations were started between players, organiser and a waitress representing the pub. The result was a change in start time to 9.30 on Sunday morning.

Play eventually started at 10.30 on Sunday, when it was discovered that all but one of the first-round singles matches involved a player tied up in the doubles. A solution had to be found that would prevent play continuing late into the evening so, much to the credit of the ‘lesser’ players, the singles plate was started between those likely to lose in the first round of the cup. This occupied one court while the other was used by the remaining doubles semi-final and then the final. Hard-fought doubles games resulted in Tristao & Kay being victorious over Russell & Arnold.

When the singles cup got under way, it was to the great relief of the organiser that none of the first-round matches caused an upset, so the plate games already played could stand. A highlight of the early rounds was Butler versus Russell. Sam Russell seemed on the way to an easy win in the first game when Dave Butler started to claw his way back, eventually winning that game 12-11. The second game was no less tight, with Dave eventually overcoming Sam 12-10, before being soundly beaten himself in the semi-final by a rampant Ed Kay. Dan Tristao had an easy passage on the other side of the draw, setting up an excellent final. Superb athleticism, tactics and ball control held the spectators in thrall, with Ed eventually wearing down Dan to take a well earned win 11-9, 12-10. Sam Russell has posted videos of both games on YouTube; well worth a watch.

In the plate, Ed Hawke completed a great weekend, adding the singles trophy to the doubles plate.

The organiser and players owe a huge debt of gratitude to the Manchester Y Club who allowed us to use the Fives courts for the day, and to Wayne Enstone for arranging the takeover. I hope we did not create too much extra work for reception or the cleaners.

RESULTS
Doubles
The doubles was played in the main at Giggleswick on damp and slippery, but not dangerous, courts. Only the Arnold/Russell versus Butler/Buchanan semi-final and the final were held over to the Sunday and played on the Manchester courts.

Singles
All the singles matches were played at Manchester. 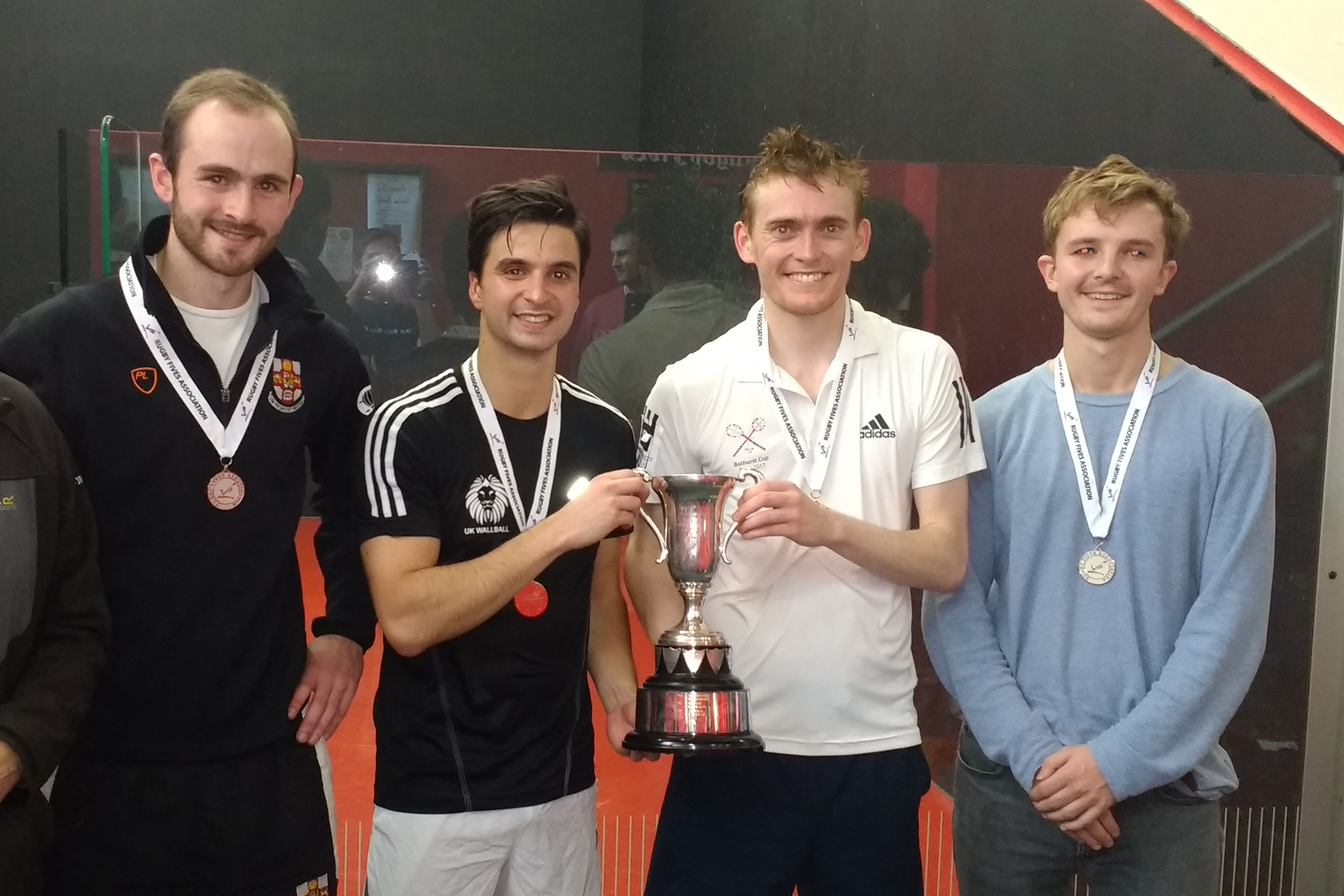 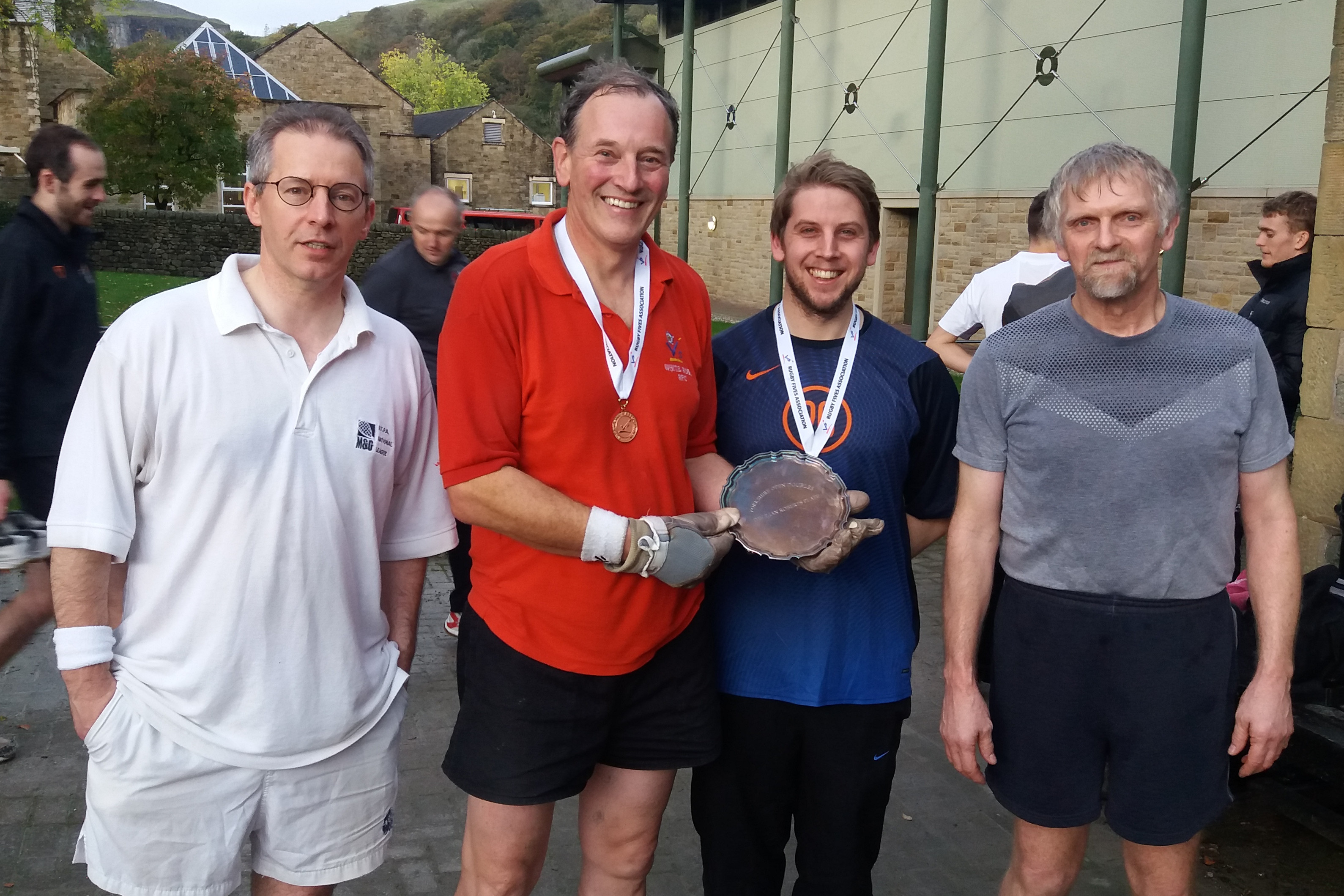 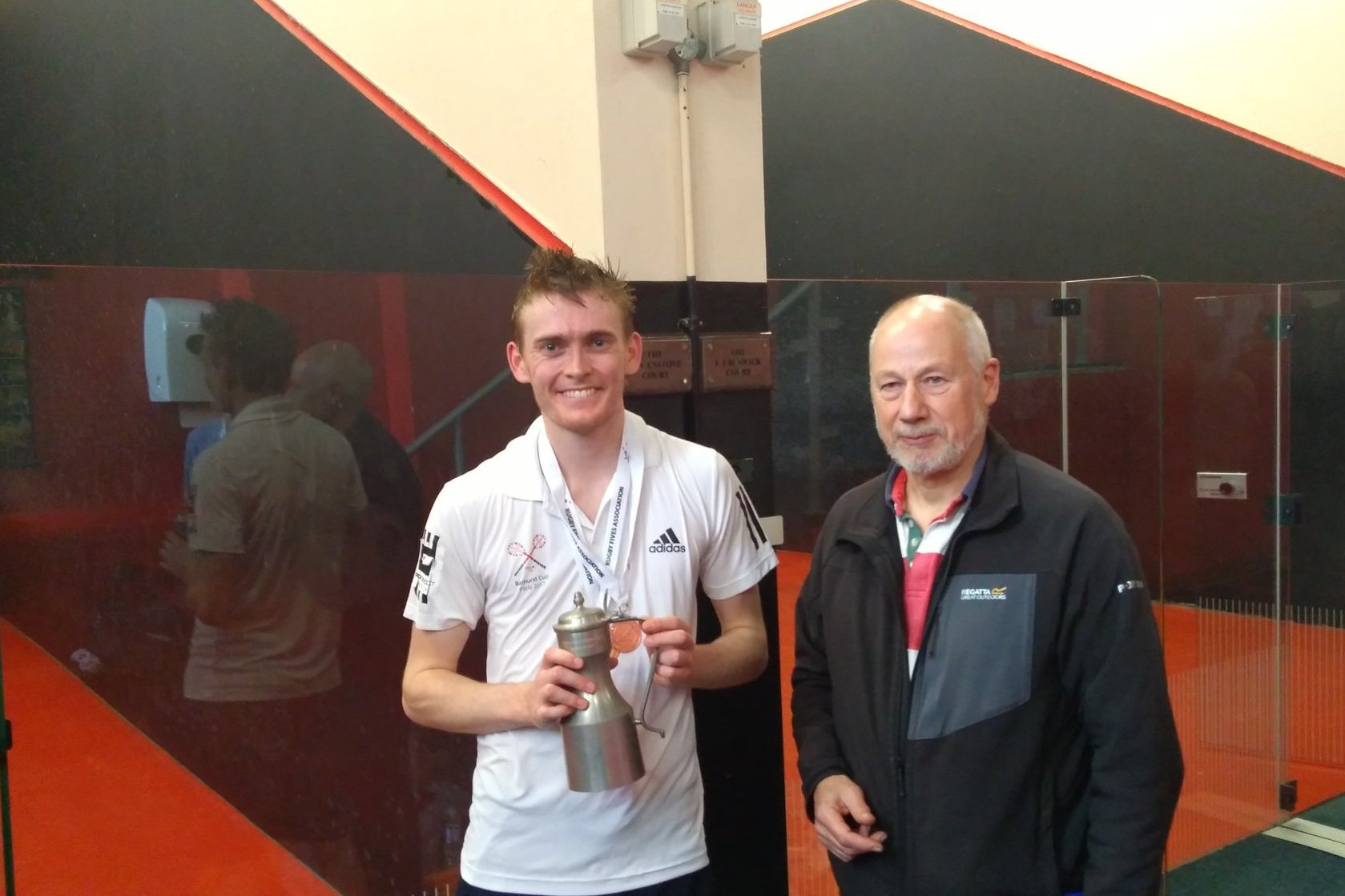