STOP PRESS
Dan Tristao ended 2016 on a high, adding victory in the President’s Cup to the national singles championship that he won last week. His partner in winning what is generally regarded as the toughest event in the Fives calendar was Morgan Spillane, a former Irish 4-Wall handball player, who now plays at the Christ’s Hospital Club.

This is the first time that Dan has won this event, but there will be several ‘repeat offenders’ engraving their names on the various other bits of ‘silverware’. The Mate’s Plate was won by former Cup winner Guy Matthews and Ben Beltrami; the T-Pot went to Jon Abecassis (2007 Cup winner) and Angus Hanton; and the Love Mug was won by David Butler (T-Pot winner two years ago) and Charlie Barnett.

This year’s edition of the over-subscribed President’s Cup was tinged with great sadness, and not just on the part of those several players who didn’t make the cut. As our estimable organiser Gareth Price told us in a mid-session break, the courts are earmarked for demolition in the coming summer to make way for a Geography Teaching Block. with no firm plans as yet for their replacement. This then was the last President’s Cup to be run at Sandy Lodge Lane for the foreseeable future.

But hey, as they say, let’s not be too downcast: perhaps one day we may see a suite of 4-6 courts, with air-conditioning, players’ lockers and arcadian piped music gracing the MTS campus. Meanwhile Gareth raised our spirits with not only enough sandwiches to shake a stick at (whatever that may mean) but also with his mother’s delicious Spicy Chicken Noodle Soup, copious mince-pies, mulled wine and crackers with traditionally bad jokes, of which Dave Butler got the best: Why does Santa have three gardens?*

With little need to wear a paper crown Guy Matthews also provided on-court entertainment, not just for his bemused partner Ben Beltrami and the opposing pair but for all the chilly spectators at 7.30pm who watched Guy & Ben wrest the Mate’s Plate from Hamish B. & Jon Peterson. Guy now nearly has the full tea service: just the T-Pot to win and he’ll join an illustrious club whose full list of members #OnlyDavidBarnesKnows, but certainly Hamish belongs in it.

Incidentally, with Hamish Hunter now a feature of the Fives world (he was playing with Ed Hatton), we will now have to refer to Hamish B. as “the real Hamish”, as he was delighted to hear himself called recently.

Dave Butler, when he wasn’t posing for x-rated photos with Dan T. or pulling crackers with all and sundry, had the repeat experience of winning an absent trophy, namely the Love Mug, with Charlie Barnett. Last time it was the T-Pot with Bernard Atkinson, but at least that time a creative President, Bob D. was able to present Dave with the Electric Kettle. This time there was not even a coffee mug bearing the message SLEEP – EAT – PLAY FIVES – REPEAT as recently presented to the Fettes Girls at the Ladies U23s. Dave must feel very hard done by, except that Gareth had paired him up with the excellent Charlie B., who is following in Dan Grant’s footsteps at MTS under the excellent care of Gareth and Simon Hardman and carried Dave to victory.

The Love Mug itself, so Ben Chua tells us, is currently residing at an address not unadjacent to Buckingham Palace. Perhaps those well known lovebirds at St. James’s Palace are using it?

The T-Pot, however, now seems to have found a permanent home in slightly less upmarket Herne Hill as Julian Hanton returned it this year only for his father to win it back playing with Jon Abecassis, a pleasing Oxford/Cambridge combination, though Jon did his best to spoil the look of the pair with his Union Jack shirt. Or was it a pro-Brexit statement? With no Jeremy Stubbs this year to carry the French flag, the fans in Burgundy and Banstead strangely quiet and an indisposed Monsieur Barnes absent, there was little of a continental flavour to the occasion.

But we did have our Irish Connection, namely Morgan Spillane, whom Gareth had paired with new National Singles Champion Dan Tristao. Those who regard CH, where Morgan has learnt the game, as nearly as far flung as the rest of the EU were somewhat surprised to find that left-handed Morgan hits the ball with Ollie-Arnold-like power and makes a mistake only once every 90 minutes. Dan was therefore able to indulge himself in the final with every shot under the sun, and quite a few of them under the bar, and still come out well ahead of Tim Hebblethwaite & Andy Passey. All four players in the final were debutants, all are now members of the RFA, and proceedings were brought to a witty close by President Bernard by 8.pm; what finer advert for the event?

So, the venue next year? Does anyone know of a set of 4 courts suitable for a December event, with radiators and a kitchen? Or prepared to gift us a heated marquee to erect outside the courts at Alleyn’s or Whitgift? Creative thinking needed if the legacy of Geoffrey Rimmer is to be honoured in the manner that befits his memory. Perhaps Santa has something in his sack. 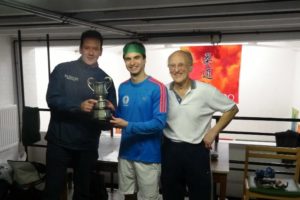 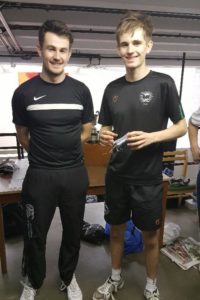 Where is the Love Mug we once knew? 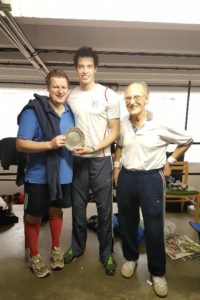 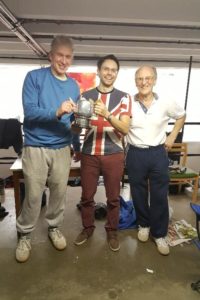