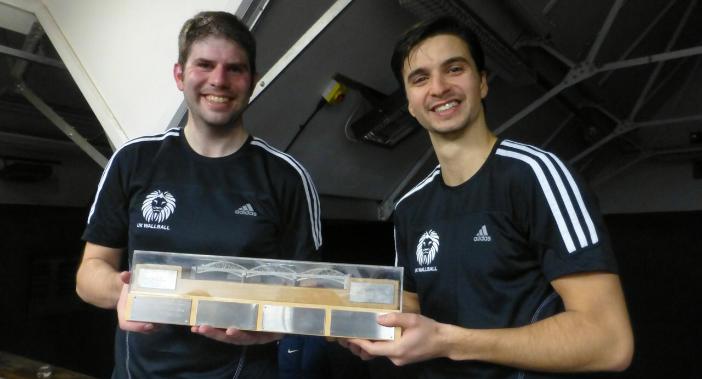 Winchester College, March 15th
Harry Akerman reports: It took just under 12 hours at this year’s Barnes Bridge for Dan Grant and Dan Tristao to emerge as first-time winners, and in doing so, become the first players to beat Will Ellison and Hal Mohammed in the tournament since 2008. This year’s event was held in Winchester, with 25 pairs entering, and there was a noticeable first-round victory for Zac Jopling and Matt Nunes from St Paul’s over the experienced Winchester Fives pair of Jules Pearce-Smith and Stephen Coffey. The Winchester College colts Alec Younger and Tom Kidner also had a fine victory over Dick Warner and Matt Blunden.

The second round saw (slightly surprisingly from the organiser’s point of view, given the strength of the draw) the top eight seeds all go through to the quarter-finals, but not without a scare for a couple of them. James Pinder and Adam George took a game off Mario Mohammed and Harry Akerman, while James Marshall and Ed Hawke were 13-11 up in the second game having won the first before Sam Roberts and Matt Shaw came back to win in three.

The quarter-finals saw easy passages into the semi-finals for the top three seeds, but Dave Fox and Matt Cavanagh sneaked past Hamish Buchanan and John Minta in three games (perhaps John was feeling it in the legs a little, having warmed up for the Barnes Bridge by doing a 32-mile hill run the day before!).

It seems that the quarter-final had also taken a lot out of Dave and Matt, who were easily beaten by Hal and Will in the first semi-final. The other semi saw Ben Beltrami and Oliver Arnold play some excellent, powerful fives before they were finally outdone by the Dans in two very close games. Their day in the Barnes Bridge will come, and sooner rather than later, on this showing.

And so to the final, where the Dans were soon 8-1 up and it looked as if Hal (who currently lives in Trinidad and for the last three years has flown over for this tournament to play his only Fives of the season) was going to struggle with the pace of the game, as Will and the Dans were smashing it around the front of the court.

Hal stuck in there, though, and by the end of the first game he was holding his own and so, despite the first game being 15-9 to the Dans, it was still not obvious which way the match would go. It was even less clear 20 minutes later when Hal and Will won the second game 15-4 to level the match, but Dan and Dan came out strongly in the third game.

They applied plenty of pressure to Hal in the left-hand corner who hit shot after shot back down the left-hand wall. Each time the Dans went ahead by a few points and it looked like they might run away with it, back came Will and Hal. But, in the end and after some phenomenal play around the front of the court by Will in particular, Dan and Dan proved just too strong.

A very high-quality Plate saw 16 pairs enter, and in the end, Tom Watkinson and Rob Whitehorn beat the exhausted Ed Hawke and James Marshall 16-14 in the final.

Thanks to all those who entered – especially Jon Lidiard, who brought his team down from Sedbergh, and Bob Dolby who brought down the players from Derby, although probably all of our travelling miles added together did not match the trip made by Hal! Next year Sedbergh…

And for a press report, in the Southampton Daily Echo, go to http://www.dailyecho.co.uk/sport/11867466.Get_Active__Why_Winchester_Fives_is_better_than_squash/