STOP PRESS Ben Beltrami, representing BPP, finally won the Singles title after three previous disappointments while at Cambridge — at the expense of the defending champion Dave Butler, who was hampered by a damaged hand. However, the double was not to be for Ben, as Bristol’s Ollie Arnold & Theo Parker retained their Doubles title by defeating Ben and his new partner Tom Watkinson. There were close matches in the Plates, where Will Shardlow of Oxford won an epic Singles final against Harry Jackson from Durham. In the Doubles Plate the miscellaneous pairing of Joe Sumner & Addie Chai denied Will his double, playing with Dan Whitham. Phoebe Thornhill, though, did the business for Oxford in winning the Women’s Singles Plate.

Organiser Theo Parker reports: This year, Marlborough College provided the ideal setting for the British Universities and Student Fives championships. The four enclosed courts played consistently throughout the weekend, despite the cold, with the new Wiseman ball facilitating long rallies and lots of nicks. Entries were up from last year, with 44 for the singles and 20 doubles pairs. Alongside 9 of the top 20 ranked singles players, there were many playing in their first ever competitive fives tournament, notably from Cambridge University thanks to the tireless work of captain Ashwin Ahuja. There were also healthy numbers from Oxford, Durham, Edinburgh and Bristol. As a result, the tournament was competitive throughout, with plenty of tight matches in both main and plate competitions.

The singles went to seeding until the quarter-finals, where 4th seed Tom Watkinson (London BPP) met 5th seed Theo Parker (Bristol). This resulted in the longest match of the tournament, with Theo just coming out on top 15-13 in the 3rd. In the other quarter-finals, Andrew Boyd (Edinburgh) managed to overcome Ollie Arnold (Bristol), Ben Beltrami (London BPP) beat veteran Peter Hanton (Oxford) and David Butler out-manoeuvred the youngest quarter-finalist Ben Kirwan (Oxford). In the semi-finals, late on Saturday evening, Butler managed to comfortably beat a tiring Parker, whilst Beltrami was ruthless in dispatching his former Cambridge teammate Boyd in the other. This meant that the final was, as expected, between the top 2 seeds, Butler and Beltrami. The former was defending his title from last year, whilst the latter was looking to win for the first time, having lost three finals to Ed Kay in previous years. As it was, Ben was in imperious form, dominating the court from the start and hitting countless nicks. Dave, who admittedly was a bit under par due to a hand injury sustained the day before, had little in answer to this onslaught. So Ben came out on top 15-8 15-3 to deservedly take his first BUSF title and solidify his 4th seeding for the National Singles in a couple of weeks.

This year, there were two fiercely contested plate competitions. With a record 6 women playing this year, we were able to run an inaugural women’s plate competition. This was played in a round-robin format, with Phoebe Thornhill (Oxford), playing in her second BUSF championships, showing her experience in winning all four of her matches and so taking the crown. Mention must also be made of national ladies’ champion Louise Mathias, who entered the main plate instead, winning a number of matches in the process. With a 50% increase of women playing from last year, women’s university fives seems to be on the rise.

In the main plate, there were 23 entrants, providing something of an organisational headache. Six groups resulted in some extremely tight matches, despite the American-scoring format. In the end, Will Shardlow (Oxford) and Harry Jackson (Durham) met in the final, played on Sunday morning. The match was an epic, outlasting the main final by quite some distance, with both players exhibiting great consistency. In the end, Will came out on top in the third game, after over 90 mins on court. Luckily for Harry, he managed to get his revenge in the doubles immediately after.

Onto the doubles. In the main, it was clear that Bristol’s Parker & Arnold were the pair to beat. And no one managed to, despite a strong challenge from new pairing Beltrami & Watkinson in the final. This meant that Theo and Ollie took their second BUSF doubles win, having been runners-up the three years before that. Ben and Tom had managed to overcome an Edinburgh pair of Butler & Boyd hindered by Dave’s injured finger. In the other semi-final, Theo & Ollie beat Oxford’s no.1 pair Kirwan & Bhushan who had won an epic quarter-final against scratch pairing Alex McGee (Birmingham City) & Bristol’s Cameron Low. McGee was especially ecstatic to have won his first ever knockout match to reach the quarter-final stage. There were 11 pairs in the doubles plate, including a number of mixed pairs from Cambridge and Bristol. Three groups resulted in two semi-finals, followed by a final between Whitham & Shardlow (Oxford), and Sumner & Chai (KCL/Warwick). This was a tight match, won by Joe Sumner and Addie Chai, playing for the first time together and going home with silverware.

The trophies were kindly presented by previous organiser and tournament creator David Gardner, who, along with David Barnes, Bernard Atkinson and Bob Dolby, provided much-needed support throughout the weekend. Thanks also to Marlborough College, and especially Tom Kiggell and Julian Beckett, for kindly hosting us and providing such excellent facilities. Until next year! 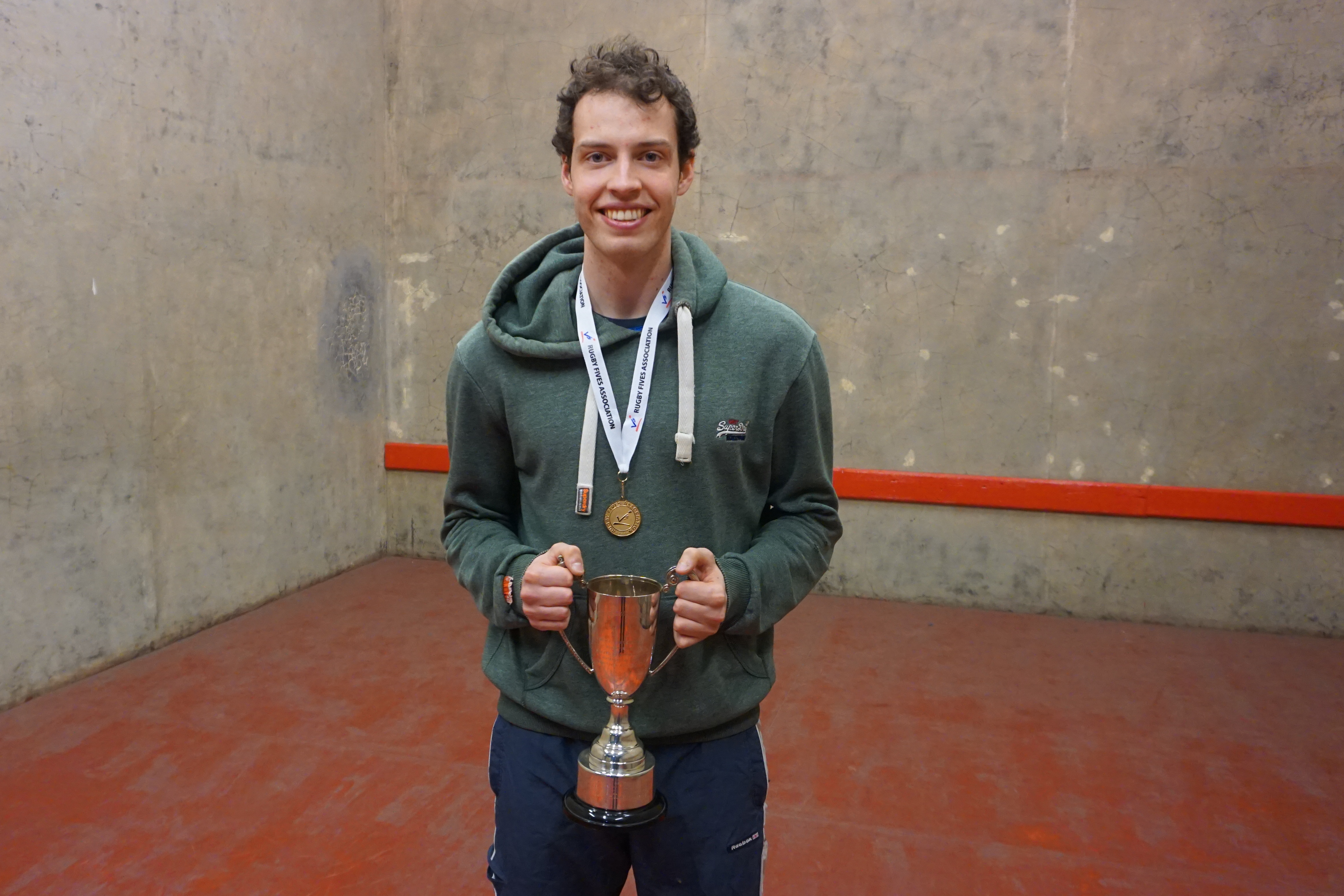 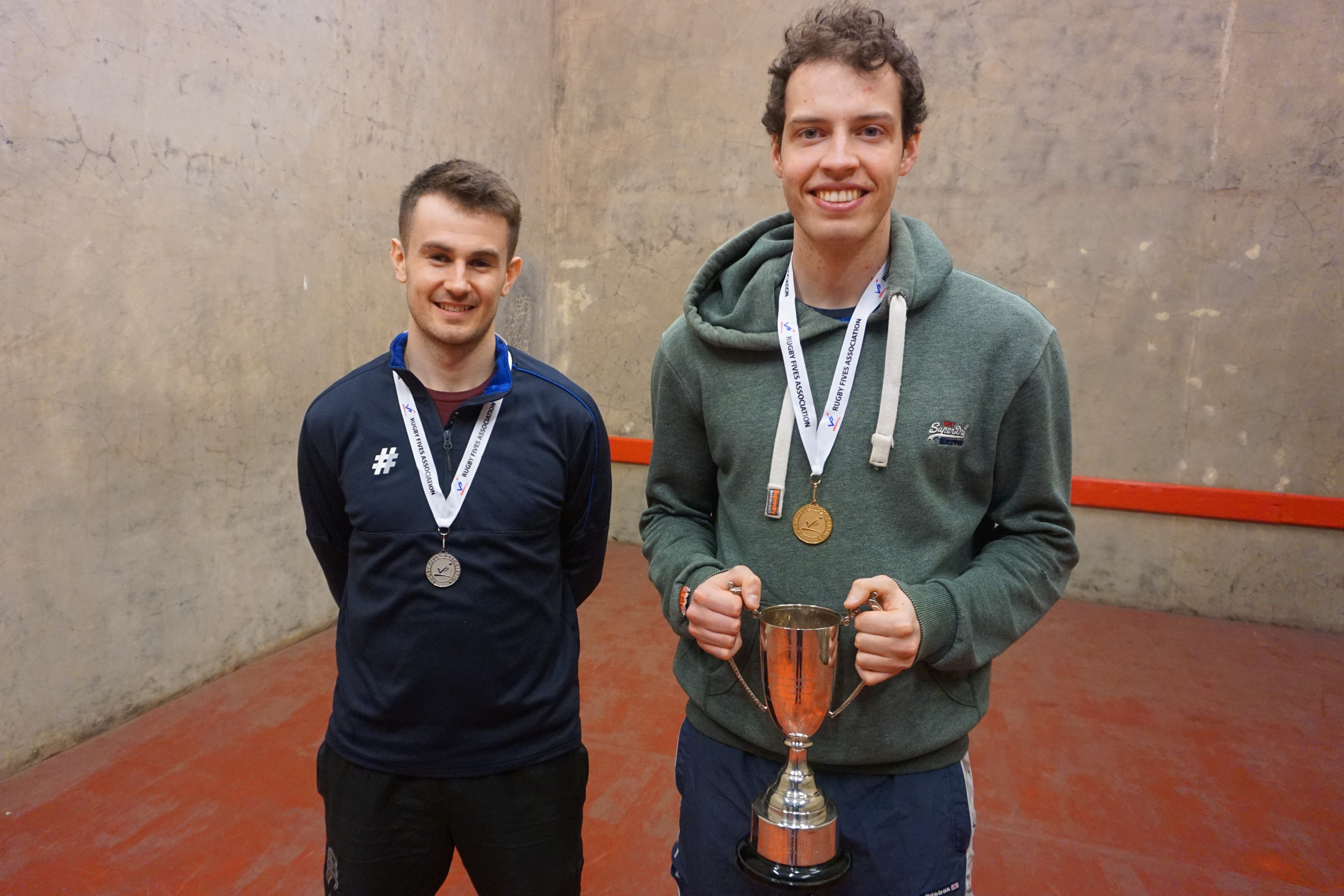 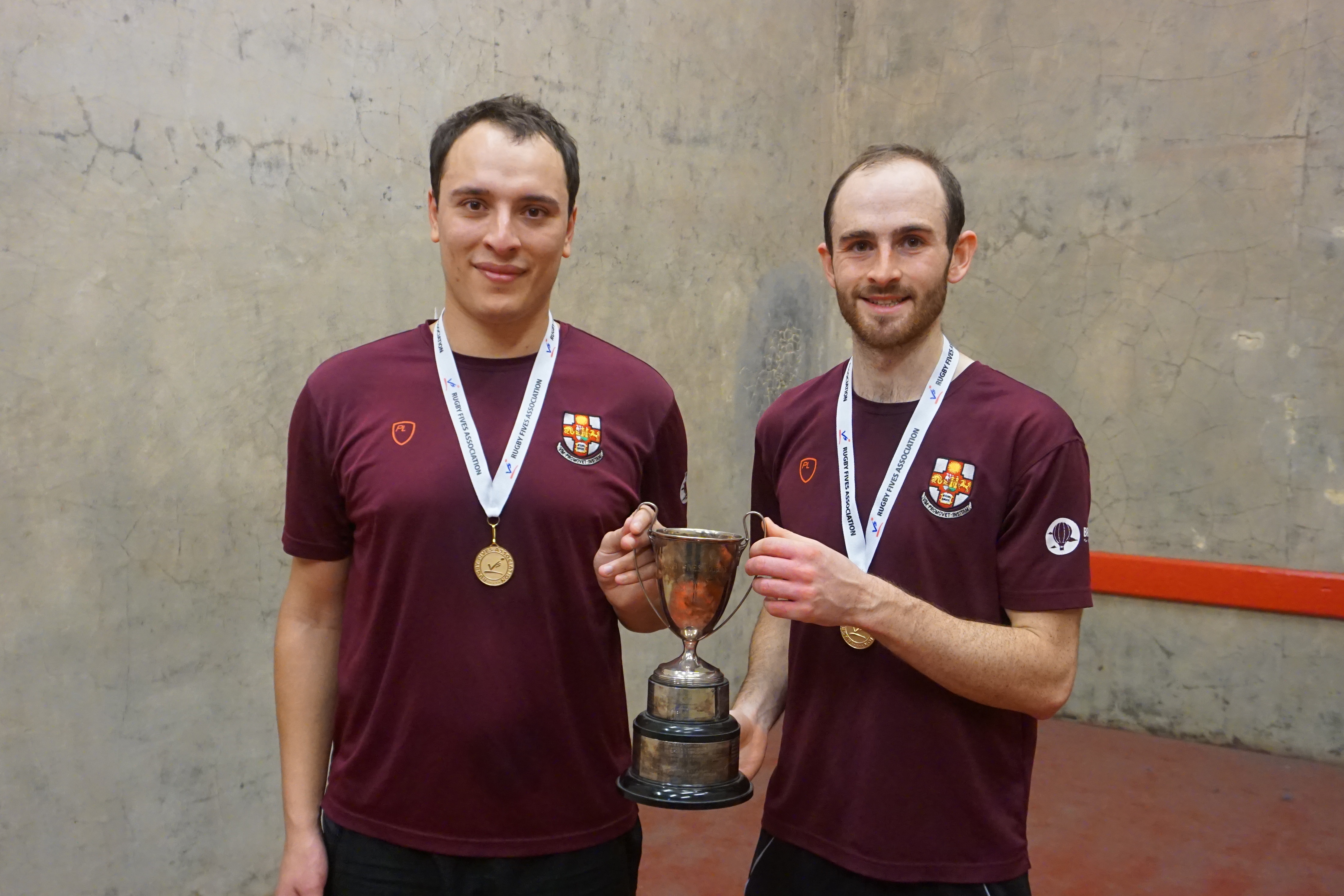 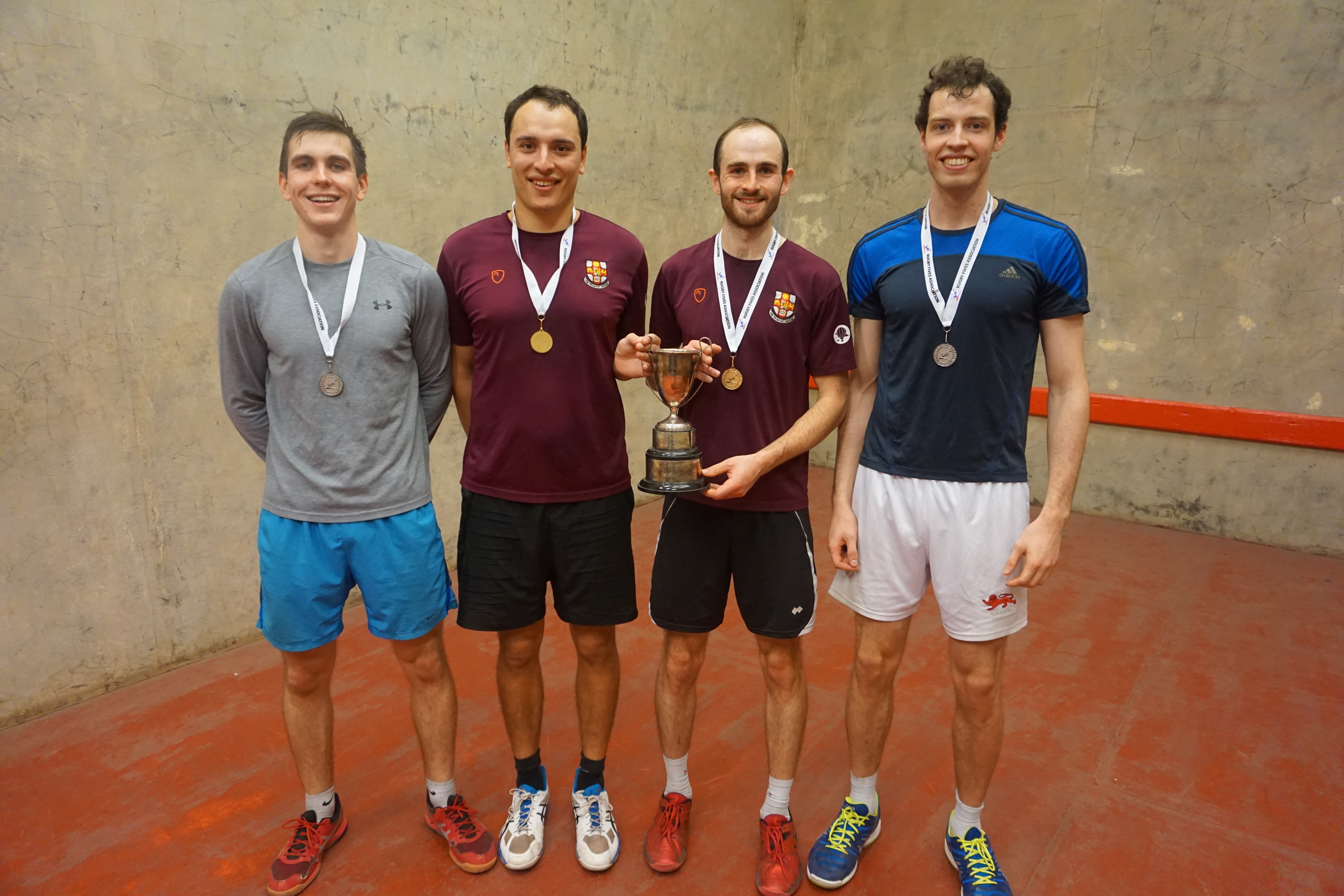 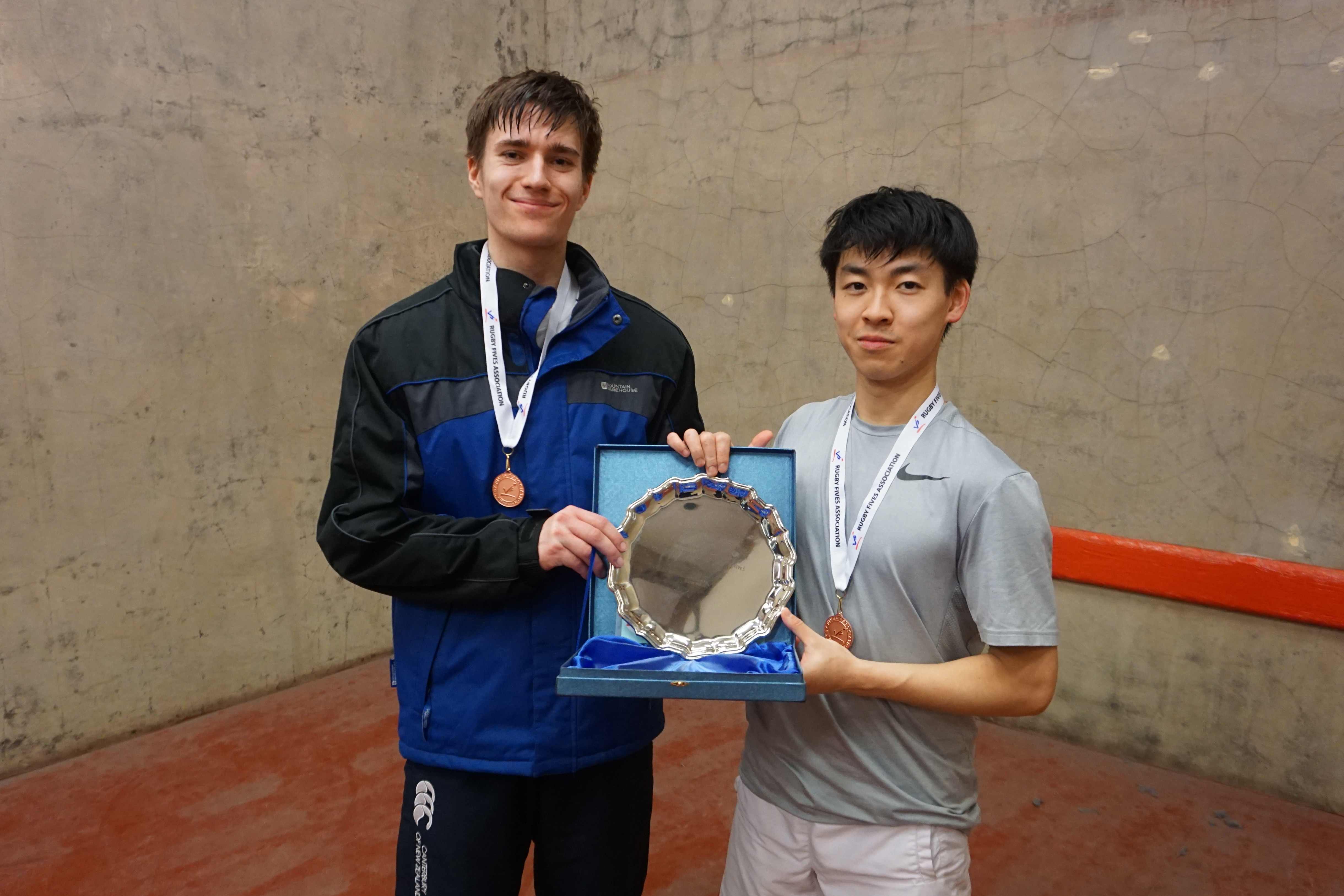 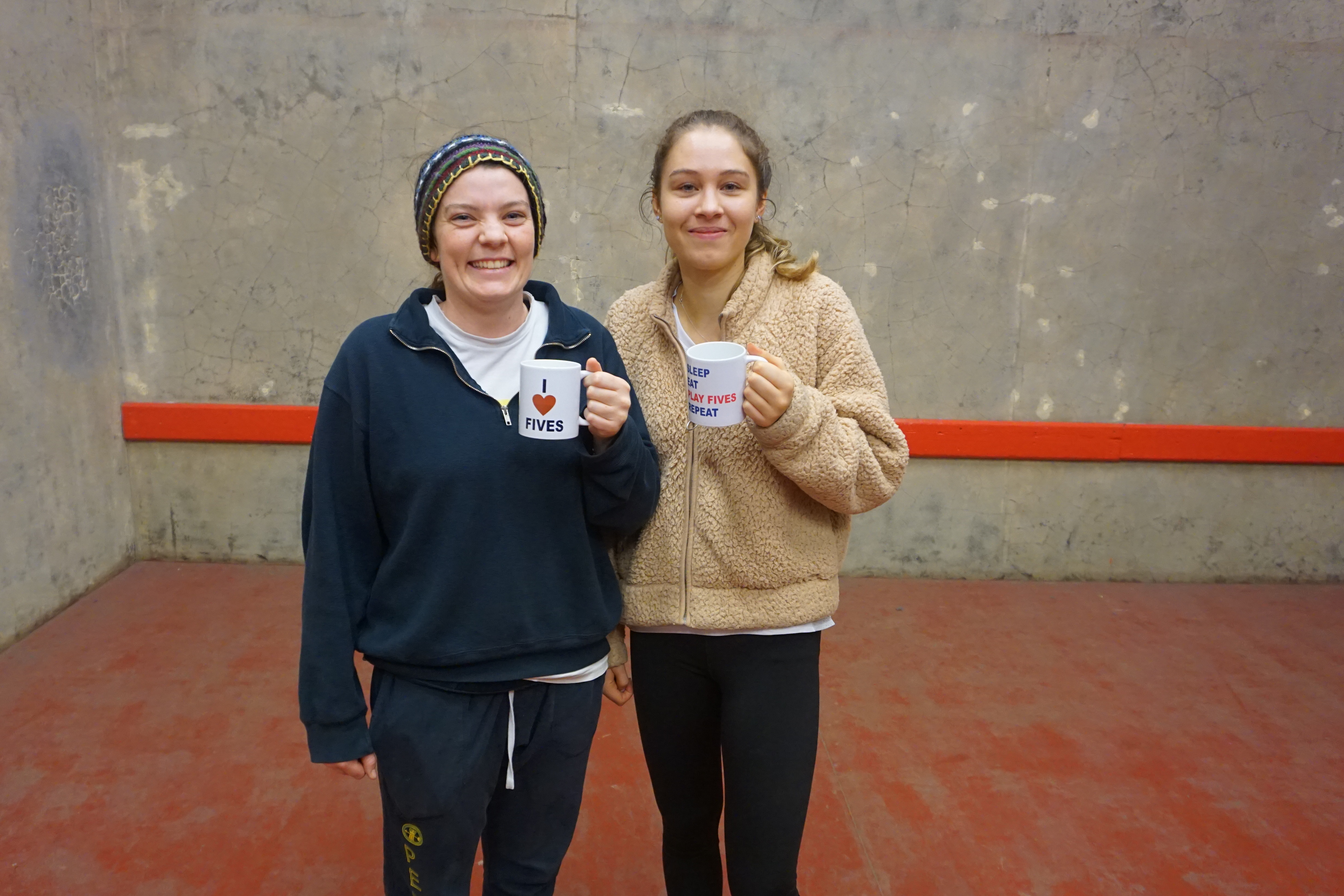 The Cambridge ladies with their spoils