The entry for this year’s Veteran’s singles was not as big as in some previous years, though the quality was superb. Newcomers to the event included Rick Carr, playing his first games for 18 years, Matt Cavanagh, and Raoul Sbaiz. Raoul’s interest in Fives has been inspired by Jeremy Stubbs, who lives in France and spreads the Rugby Fives word by encouraging the natives of Reims to play the squash court version of the game. Before Saturday morning, Raoul had seen neither a real Fives ball, a proper Fives court, nor, indeed, England. Jeremy had to act as his translator, although it was evident to all from the big grin he carried that he was enjoying himself.

Generally as expected, the Cup competition saw a semi-final line up of Minta versus Kiggell and Buchanan versus Cavanagh. Carr had the misfortune to be drawn against Cavanagh in the quarter-finals, and while looking a class player was defeated partly by Matt’s superb play and partly by unforced errors caused by his severe lack of practice. Tom Kiggell put up a good fight against John Minta in the semis, taking him to 3 games whilst complaining that his sixth formers did not really prepare him for John’s unremitting onslaught. On the other side of the draw Matt Cavanagh was made to work hard by Hamish Buchanan, but eventually won with comfort.

Some incredibly long rallies made the final exhilarating to watch and debilitating to play. John’s superb fitness could only benefit him to a limited extent and in the end Matt ran out a comfortable, though tired, winner.

Neil Roberts added to his lifetime haul of trophies by winning the Plate in fine style, defeating Nick Geere in the final. Keith Kennerley won the Bottle of Beer (aka the Second Plate). After a superb Saturday evening meal, the result of the well directed local knowledge and managerial ability of Tom Hillman, Sunday was a busy day, with 20 pairs entered for the doubles.

Everybody appeared ready when the organiser arrived just before the start time. In a noticeable break from Fives tournament tradition, players were on court warming up before the event was due to start.

Again the competition went as expected, with semi-finals between Buchanan & Perry (his first Veteran’s tournament) and Sutcliffe & Walter on one side of the draw, and Minta & Pringle and Bruce Hanton & Roberts on the other side. The Buchanan & Perry pairing made short work of Sutcliffe & Walter, who had little answer to the awesome power of Robin’s right hand, while Minta & Pringle suffered some stiffer opposition from Bruce Hanton & Neil Roberts, eventually winning 11-4, 11-6.

The final was a match which, without belittling the efforts of the singles players, made the whole weekend worthwhile on its own. In the first game it looked as if Buchanan & Perry were likely to shade it, until Minta & Pringle crept up to take it by 16-15. Then there was a lower key second game, which Buchanan & Perry won at a canter, 15-5, looking as if the challenge was all but over.

The final game also appeared to be going the same way, with Buchanan & Perry getting off to a good start, only to be pegged back. They got away again, only to stall at 11 points as Minta & Pringle made a late surge to take a well earned win. Had the game been less exciting, this report might have been better. As it was, the see-sawing of the score is what can be remembered, but the detail has been expunged by the sheer excitement of the bout and awe at the athleticism of the protagonists.

At a lower level, though just as important in the minds of the participants, the plate rumbled along. Points of note are the two wins of the French Sbaiz & Stubbs pairing. This must be the first wins recorded by such a pair in a Rugby Fives tournament. They were finally knocked out in the semi-final by Geere & A Hanton, who themselves were vanquished by Mathieu & Oscroft in the final.

The Bottle of Beer was played as two round-robin groups, the winners of each playing for the coveted bottles. Suffice to say, those bottles were taken home by the organiser & his magnificent partner, Bob Sandie.

A wonderful weekend of Fives made great by those who played to their utmost and participated fully. Let us hope next year’s tournament is as good. 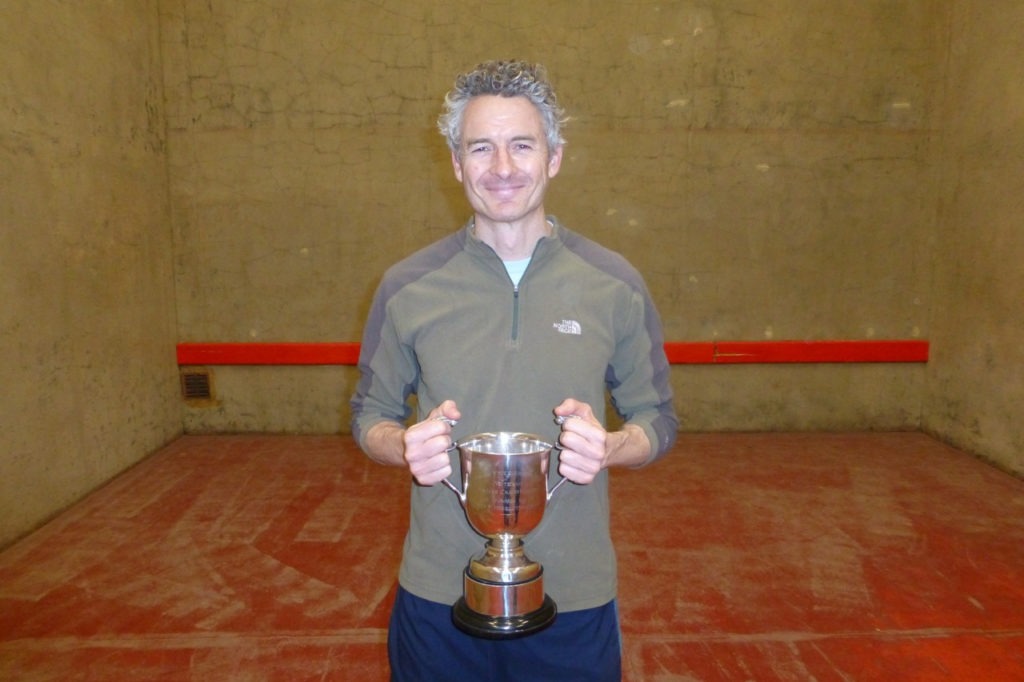