We have received the following report from our archivist, David Barnes.

Warminster School, known until 1973 as Lord Weymouth School, has a precious rarity in its care: an 1860 Fives court whose origins date back to the late 18th Century. Some would call it a Fives wall, similar to other such structures in West Country villages; but in contrast to these, it has a concrete apron in front of it and has been played on in living memory. Whatʼs more, it has a prospect of being played on again in the near future, as the School authorities are keen to resurrect the game and put the court to good practical use.

Marlborough Fives supremo Tom Kiggell and I were kindly invited to visit the School, inspect the court and provide some advice as to the game or games which might be played on it. The wall itself is Grade II listed and cannot therefore be extended or built onto in any way, thus limiting the options, but it is in good condition and fully capable of withstanding the impact of a fives ball or handball. There is a shallow ledge running across the front wall at about 3 feet from the ground, and short side walls (more like wings) project from the front wall at about 45º. 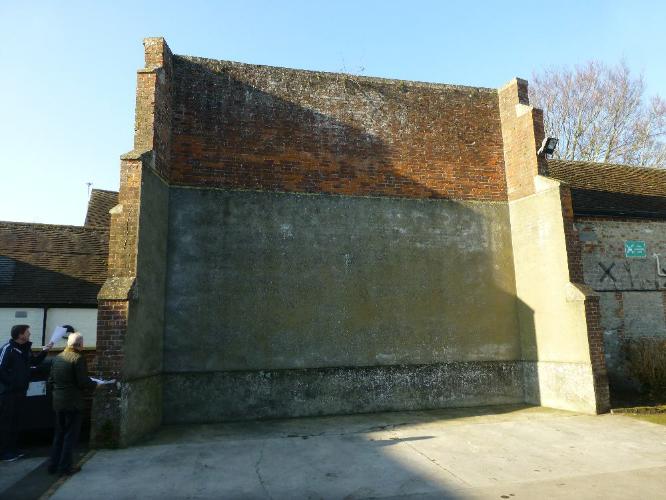 Warminster has another trump card: a set of rules for the game that was played there. So little is known of the way in which West Country fives was played that these rules, even if merely local, are of considerable interest. In the Warminster game there were three players per side, called in the local jargon ʻsquiʼ (left), ʻcentreʼ and ʻskunkʼ (right), and games were played up to 21 points. Only the serving side could win points, and each member of the side served in turn. The serversʼ advantage was such that the side serving first immediately conceded three points to the other side. It must be said that one or two of the rules are a bit ambiguous and will need to be tested to see what they really mean!

Rugby School’s most famous headmaster, Thomas Arnold, attended both Warminster School (from 1803-07) and Winchester College (from 1807-11) as a boy and according to his own account played fives at the former. This has led to speculation as to the origins of both Rugby and Winchester fives. Early forms of fives were certainly played with hand and bat at both those schools in the early 19th Century, but the eventual structure of Rugby and Winchester Fives courts owes little or nothing to West Country forms of the game, and certainly not to Arnold, who had died two decades before the first ʻproperʼ Rugby and Winchester courts were built in the 1860s. Nonetheless, the link is of interest and gives the court at Warminster further historical distinction.

For the immediate future, the hope is that reciprocal visits between Marlborough and Warminster, enabling both sets of pupils to see and experience different types of court in use, will lead to the re-invention of Warminster Fives!