Bernard Atkinson reports: Was there ever such a day…..?

I suspect that the answer is no, there never has been a single day when three National Tournaments were taking place on the same courts. This is what happened at Marlborough College on Saturday, 6th April 2019 – Archivist, take note – when the Veterans’ Singles (over 45s), the Masters’ Doubles (over 65s) and the Grand Masters’ Doubles (over 75s) took their separate courses in complete harmony together.

The Masters: Five pairs of venerable players set out to prove that there is indeed life in old dogs even if they are not totally resistant to being taught new tricks. Notable of these was some effective lobbing from Bob Sandie, which had the others, including his partner, feeling as if they were under a sustained mortar attack. In the end, last year’s winners, Tony Hamilton &  Spencer Beal, emerged summa cum laude without dropping a match. A stalwart offensive mounted by Martin Wilkinson & Mark Kiteley, produced points, but rather too few, while the rest of the field, after life’s fitful fever, were still left with enough energy to lose gracefully.

The Grand Masters: The establishment of the Masters by David Bawtree in 2003 inevitably nurtured the ambition that there might be another tournament lurking in the RFA gerontocracy. The date of inception was clearly a critical trade-off between sufficient numbers on the one hand and creeping mortality on the other! Deeming the moment to be right, Bernard Atkinson launched the new tournament, and so two pairs of players in late middle age were able to prove that there is probably life after death, with a contest of three games to 11. In the end all four players were still standing and a red line had been crossed and a serious point proved. The new trophy will be engraved with the names of Bernard Atkinson & Bev Boag, while Chris Horrocks and his partner David Neal can bask in the pride of having not only participated in the making of history, but giving the winners some nervous moments on the way. 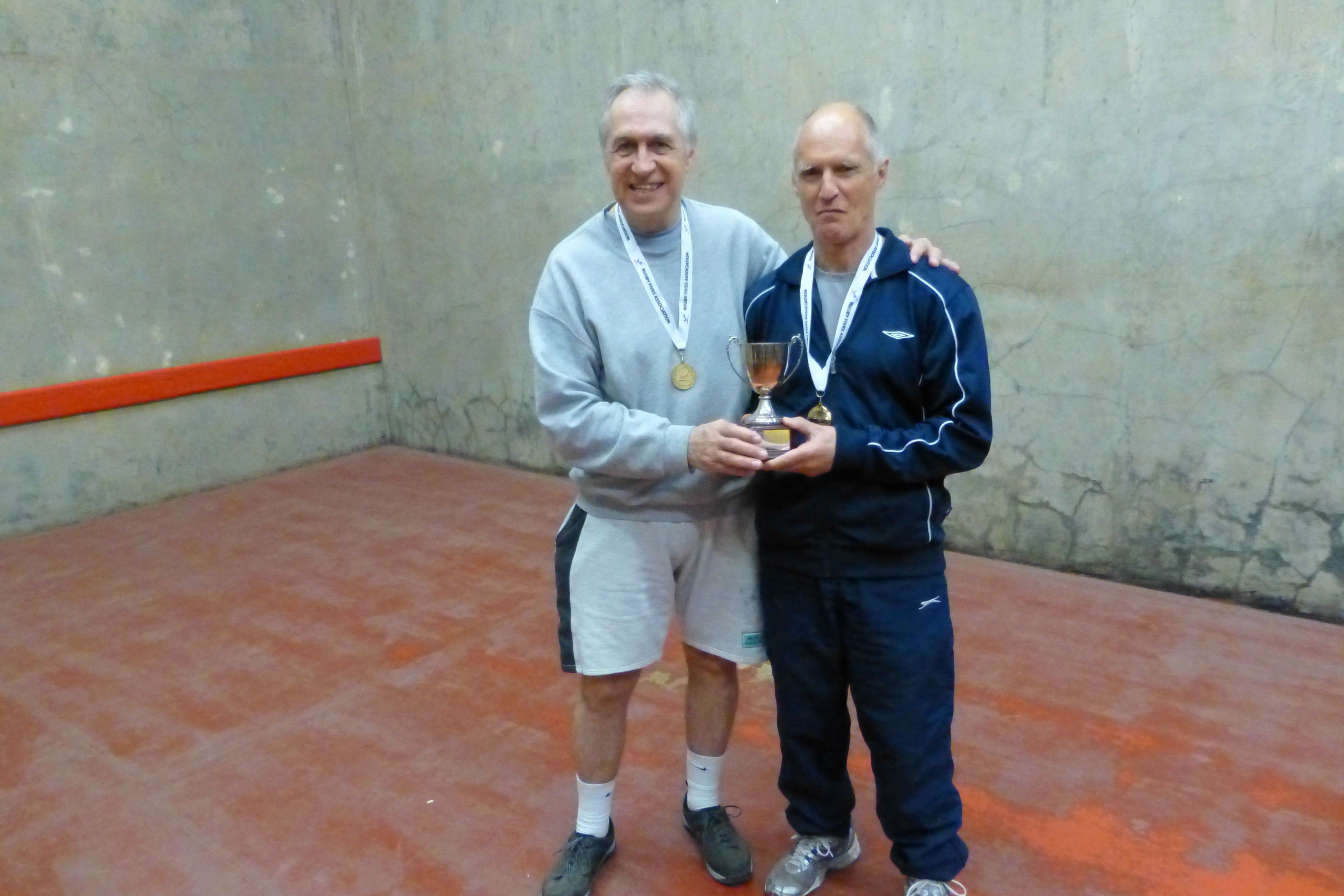 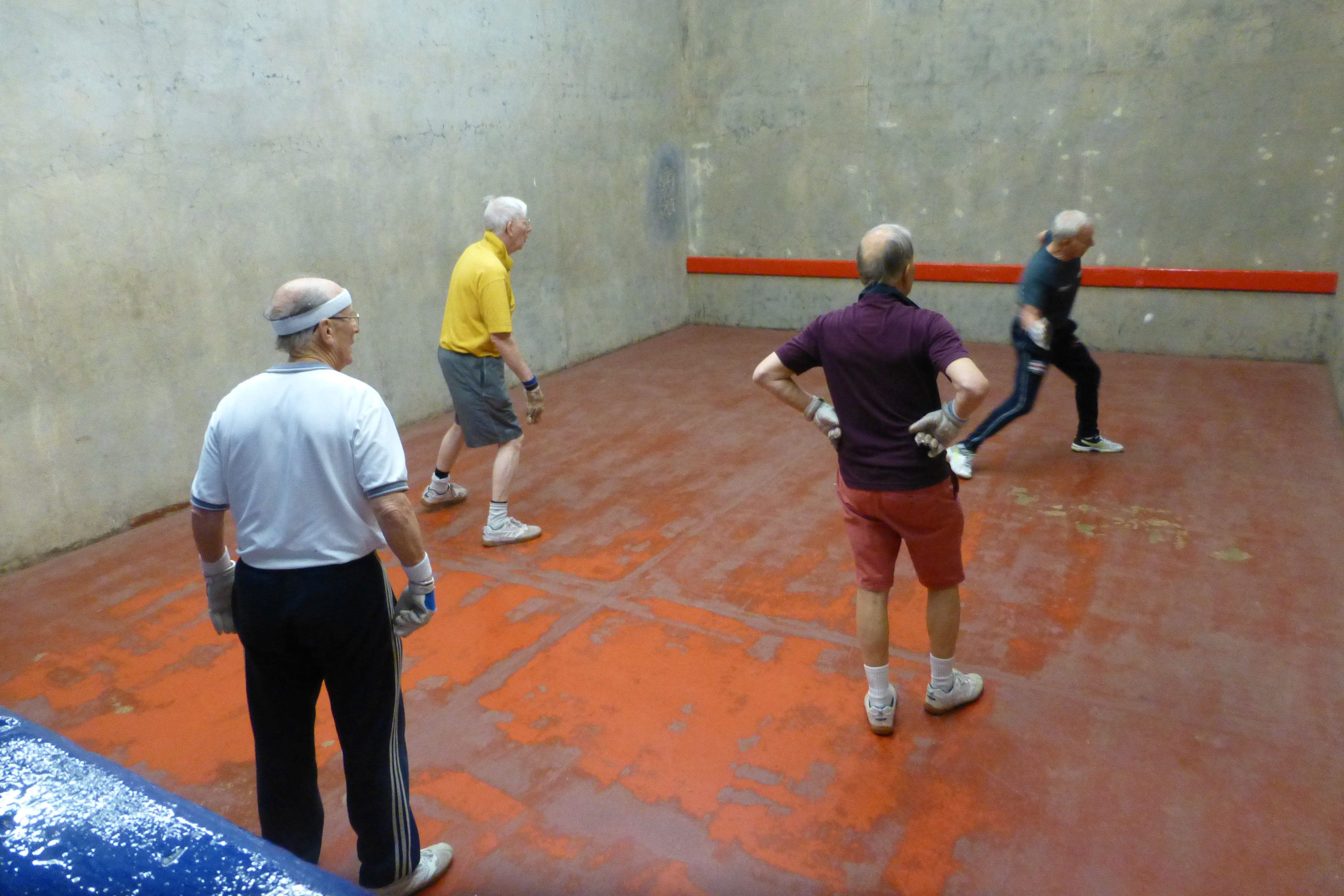 Action from the inaugural Grand Masters! 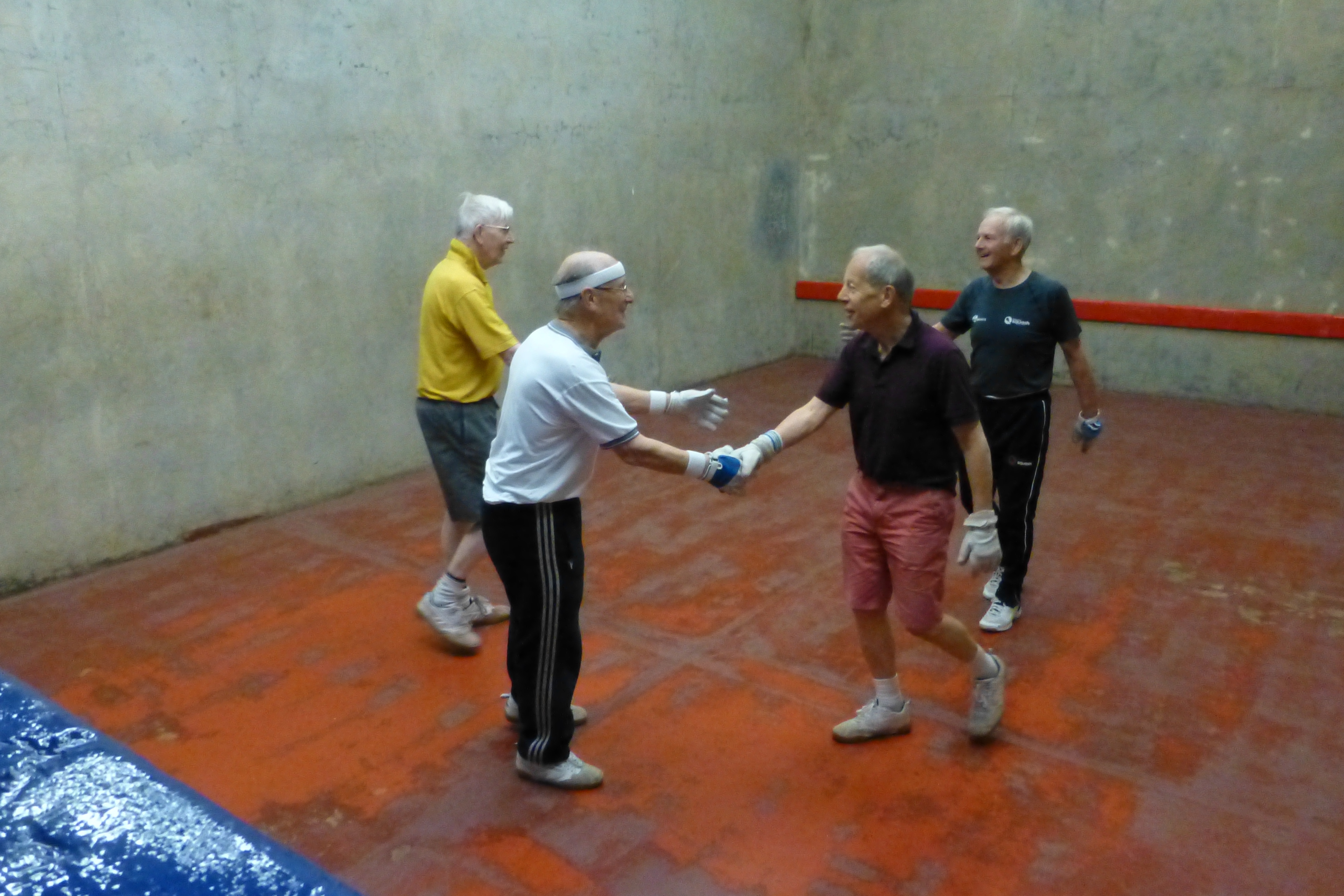 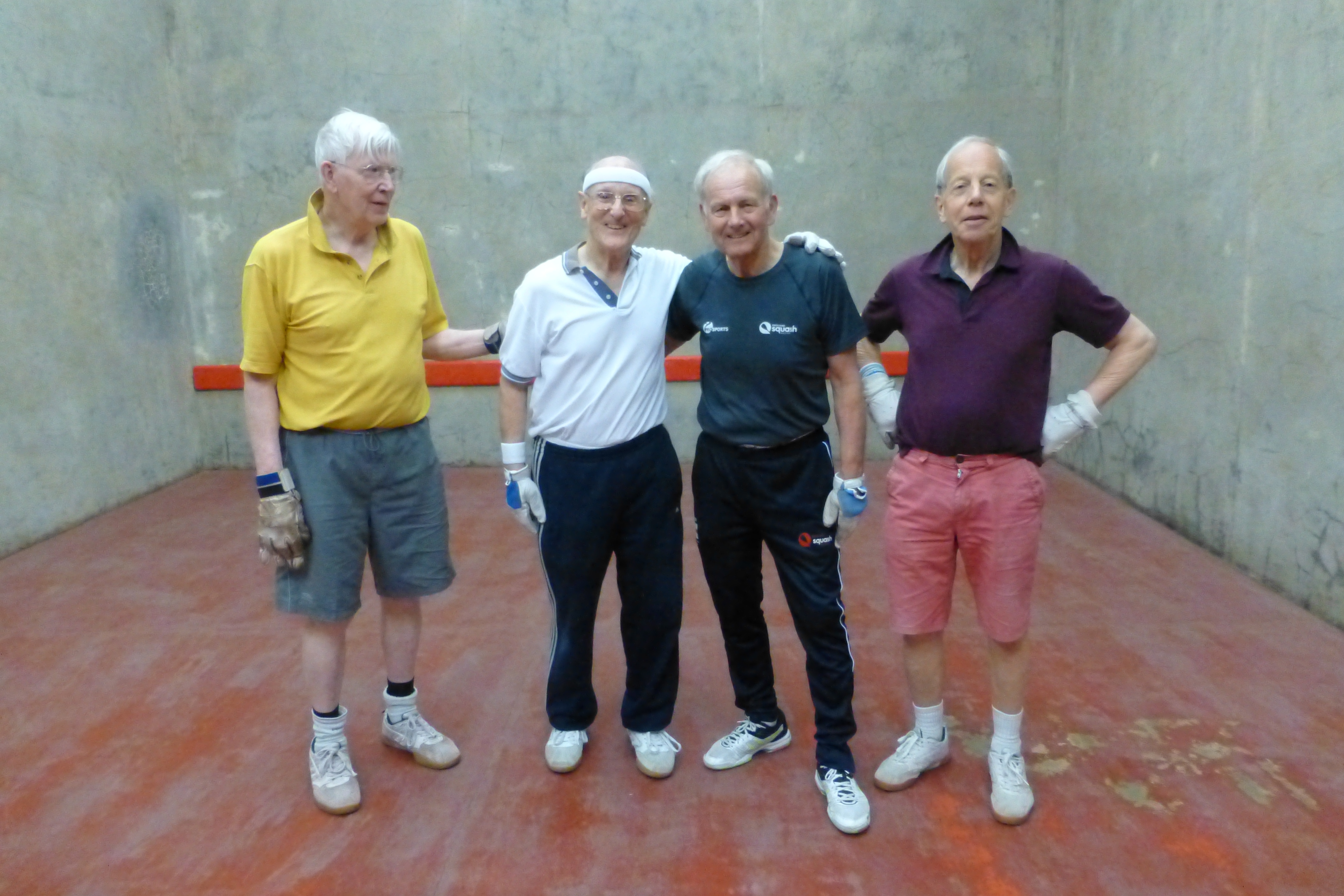 Didn’t they do well! 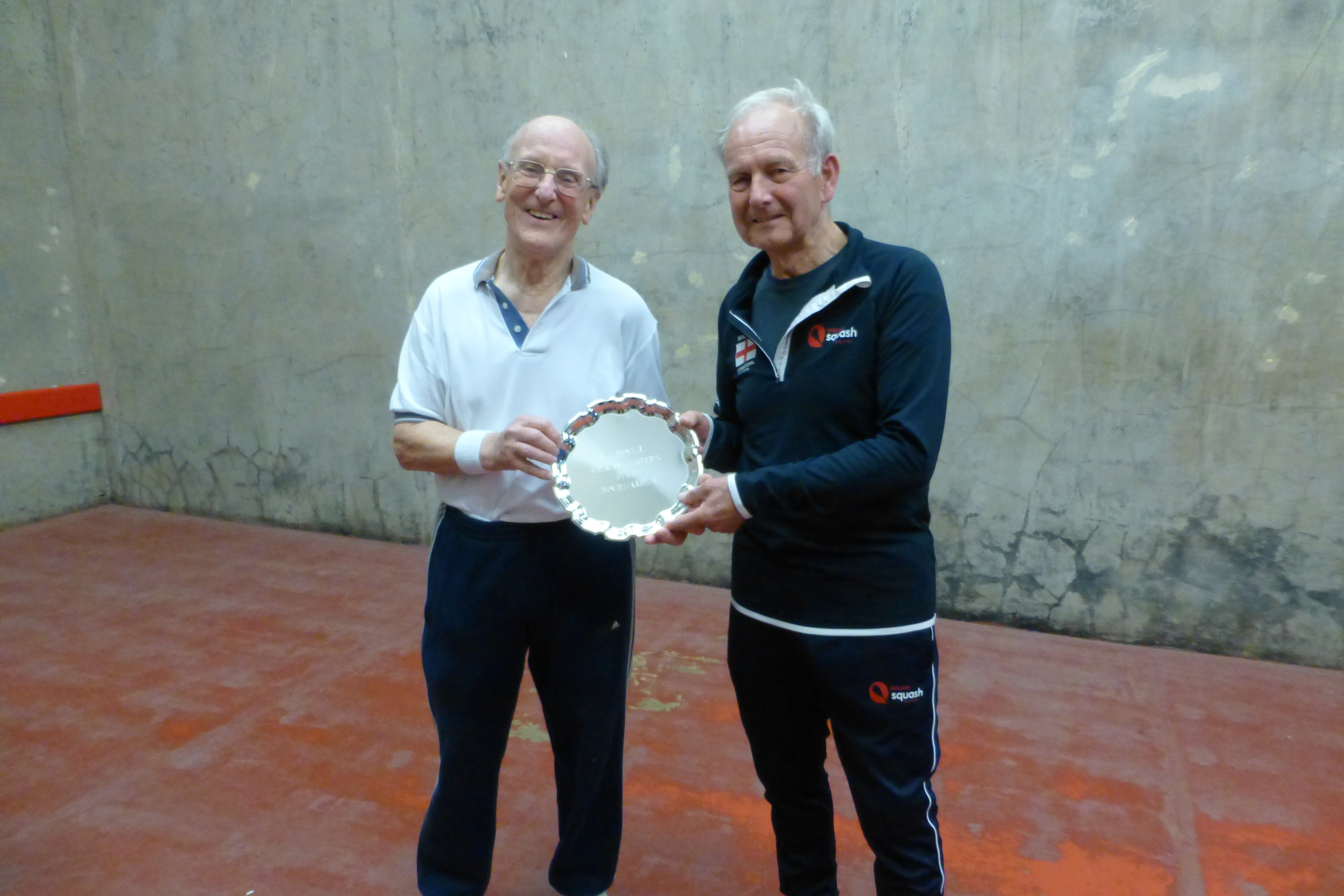