Jamie McManus reports: After the enforced hiatus of last year, the Schools’ Winchester Fives Doubles tournament returned to its place as the ‘season opening’ tournament for schools. 15 pairs took part, representing Alleyn’s, Christ’s Hospital, Marlborough, Stamford, St. Paul’s, Tonbridge and Winchester. The championship brought together some of the top talent in the U18 year group but also, with four U15 pairs involved, had an eye on the future.

Right from the start it was pleasing to see pairs from all schools making use of the buttress and doing their best to retrieve from it, too. In the main draw, things went very much according to the seeding as Alleyn’s I and St. Paul’s I made it through to one semi-final, while Alleyn’s II and Winchester I came through the other half of the draw. With players thoroughly warmed up the hard hitting really got under way, with St. Paul’s and Alleyn’s slugging things out in traditional style but with the occasional buttress twist, while Winchester I , clearly on a mission, blew Alleyn’s II away.

In the final, Winchester I got points up early against Alleyn’s I, Cloke Browne playing particularly well from the left-hand side of the court, and he and his partner Wu took the first game comfortably. Alleyn’s then fought back hard and at 11-10 in game 2, the match was up for grabs by either side.  Fittingly, when Winchester pulled away for the win, they did so by getting the buttress back in play – it was the last thing struck as match point was won.

In the Plate competition two large groups meant plenty more fives for everybody. Marlborough overcame Tonbridge I in a tight game to win group A, and Winchester II made relatively serene progress through group B. A highlight of the group matches was the game between Stamford I and Winchester II, a repeat of the U14 Doubles final from the Nationals in August. This time Winchester won out 11-8 – utilising home court advantage, of course! Nevertheless there was a definite sense of many more excellent contests to come. In the Plate Final itself, Winchester II’s experience and power proved too much for Marlborough as they won through 15-5.

As tournament organiser, I am most grateful to all the players and masters i/c for making the effort to come down to Winchester and provide an excellent and enjoyable day full of Fives. Despite the disruptions of the previous 18 months, it seemed to me that School Fives was simply picking up from where it had left off; the prospects for a competitive season ahead were obvious.

With thanks to David Barnes for photos 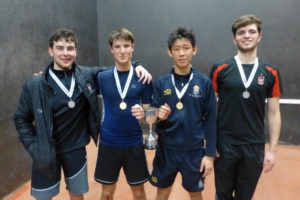 The finalists from Alleyn’s and Winchester 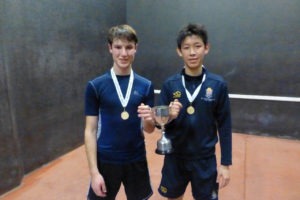 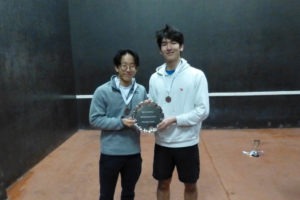 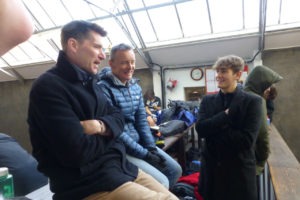 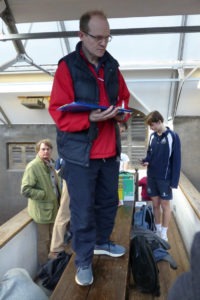 Lord of all he surveys!