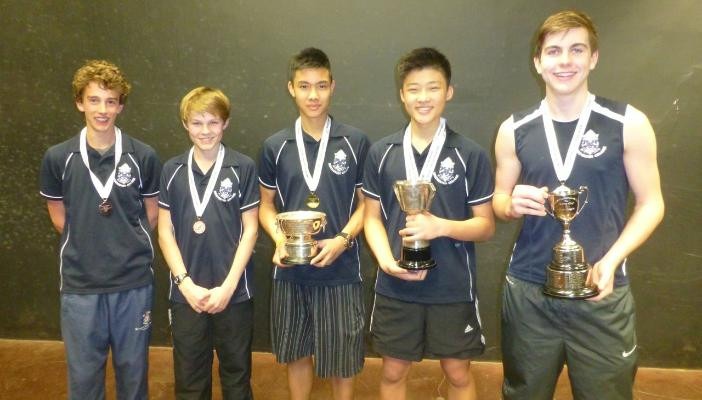 These Championships were again held at Sherborne School, writes organiser Lionel Lawson, and there were eight schools involved, with an overall entry of 52 competitors. Although the entry was slightly lower than in previous years, there was a high standard of play and plenty to keep the packed galleries on their toes.

The weekend was, in particular, a triumph for the squad from Winchester College, with wins in the Senior and Colts Singles, as well as in the Colts Doubles and Colts Doubles Plate.

There were no surprises in the first round of the Senior Singles, but in the second round, Dan Hutt from Tonbridge asked several questions of Rob Whitehorn, the No 1 seed from Derby Moor. Hutt was serving particularly well and moving the ball around at pace, but gradually Whitehorn asserted control to take the game 15-11. There was also a fine match between Tristan McFarlane and his St Paul’s team-mate, Harveer Mahajan, who was last year’s Colts winner – Mahajan keeping his cool to take the game 16-14.

In the quarter-finals, Mahajan was again involved in a very close encounter with a team-mate – Zac Jopling – but this time succumbed narrowly. There was also a nail-biting affair between Sid Bhushan and Matthew Nunes of St Paul’s, with No. 3 seed Bhushan coming through narrowly in the third. In the meantime the top two seeds, Whitehorn from Derby Moor and Tom Watkinson from Winchester, were making serene progress into the semis – and this continued for both of them in the semi-finals, with Jopling and Bhushan being disposed of with relative ease.

The final was of high quality, but Watkinson was able to keep in control with a degree of greater variety to his game, which took him to a fine win over the top seed. In the Colts Singles, the semi-finals were in line with the seeding, although the second seed, Dan Whitham from St Paul’s, needed three games to get past Andrew Tudor from Malvern. The No. 1 seed, Nico Hughes from St Paul’s, was also pushed hard by Lucas Nelson from Malvern in the first quarter-final.

There were then two excellent and hard fought semi-finals between Albert Song from Winchester (fourth seed) & Nico Hughes and Pete Kullivanijaya (third seed) & Dan Whitham. Song prevailed over Hughes in the first semi-final over three games, and Whitham just squeezed past Kullavanijaya in the second.

The final saw two very tired boys battling it out, with Albert Song prevailing in a battle of stamina.

The Senior Doubles quarter-finals saw a good win for Tom Watkinson and Bertie Robertson of Winchester over the hard-hitting St Paul’s third pair of Tristan McFarlane and Archie Taylor – and the Derby Moor fourth pair gave St Paul’s 1 a fright, being pushed to 12-10 in the second game.

The semi-finals went according to seeding, setting up an excellent contest between Derby Moor (Rob Whitehorn and John Halligan) and St Paul’s 1 (Zac Jopling and Matthew Nunes) in the final. The St Paul’s pair looked like they were heading in the right direction after taking the first game to 8, but the Derby Moor pair then started to exert control with a fine display of controlled and effective hitting, which took them through to a deserved and convincing win in the third.

The Winchester pair of Song and Kullavanijaya took their good form in the Singles into the Colts Doubles competition, although they were given a run for their money by St Paul’s II (Whitham and Monty Evans) in the semi-final. In the final, the Winchester pair just had enough control and poise to keep them ahead of the St Paul’s first pair of Nico Hughes and Dorn Shaw.

Although there was a small entry of only nine pairs in the Colts Doubles, the standard of play throughout was a credit to all the boys involved and bodes well for the future.

This competition is always a fine start to the New Year and our grateful thanks go to Sherborne School for their hospitality and the use of their excellent facilities.