After a week in which the number of expected entrants once rose as high as 10, in the end, seven teams took the courts at St Paul’s for the annual Owers Trophy event for teams of Old Boys. And, the first shock was that the defending champions – the Old Paulines – weren’t one of them.

Then, there was further drama on the morning of the tournament itself, when it emerged that one of the Wykehamists wasn’t going to turn up. This left Winchester with the potentially fatal issue of having just five players to play in two three-a-side teams. However, Fives tournaments thrive on such complications and, thanks to some leniency from the organiser and the other competitors, it was agreed that the two teams could share one player – albeit on the condition that the player in question wasn’t Wil Ellison(!).

While this player-sharing arrangement meant that progress was occasionally slow during the morning’s play, there was never any let-up in the keenness of the competition – which was witnessed by no less a luminary than Mr Owers himself.

The seven teams were split into two round-robin groups, and the first match to go court – Old Eastbournians against Old Whitgiftians – was certainly the closest of the day. Eastbourne were the more highly fancied squad, but with one of their players struggling to acclimatise to the St Paul’s courts, Whitgift played very well to push them very hard.

Eastbourne held a slender lead going into the third (and final) game of the match, and after several heart-stopping moments, only just managed to scrape together the eight points they needed to win the match. By a single point…

That meant that their final game – against the Eastbournians, who also overcame the AOBs comfortably – would decide first and second places in the group. However, the outcome of the match was never in doubt, with the OEs seemingly happy to concede first place and save their players from any injury!

In the second group, a similar pattern emerged: the top Alleyn Old Boys team and the Old Bradfieldians were sure to make the semi-finals, but with the match between them would decide first and second places.

It was a close encounter, but the Bradfieldians (last year’s runners-up) won through 44-33 to claim a semi-final spot against the Eastbournians, while the AOBs had the envious task of tackling the Wykehamists.

The two matches couldn’t have been more different. Indeed, so comprehensive was the Wykehamists’ demolition of the AOBs that their whole match took less time than one game in the other semi!

The closeness of the tie between the OEs and OBs was shown by the fact that two of three games went to 11-10, with one game apiece. However, the 11-6 win by Bradfield’s top pair in the opening game was enough to ensure their passage into the final.

From the off, though, it was clear that the Wykehamists were in no mood to hang around, and a virtuoso display of attacking Fives from Will Ellison, more than ably backed up Tom Watkinson, gave them a nine-point advantage in double-quick time.

The Bradfieldians were much closer to their rivals in the second game, but with Tom and Ben Chua eventually going on to record an 11-6 win against Jez Sinton and Tim Hebblethwaite, it put the result of the match beyond doubt before the third game was played. So, the title went to the men of Wessex, and gave Will the distinction of being the first player to win this trophy with two different teams, after he first won it with the Old Pulgrims in 2009.

The final piece of the day’s action was the Plate, although if anyone understood the format, they weren’t letting on! What was certain was that the Old Whitgiftians won it, but that was despite the facts that one of their team had to leave early to get to a football match, and the day’s final match was a doubles between the OWs’ pair of Tony Hamilton/Cameron Low and a Wykehamist/Oundelian pair of Ben Hale and organiser Alex Smith.

All the Whitgiftians have to do now is to work out how to get the Plate itself from Derby, where it still resides after Derby Moor won it last year… 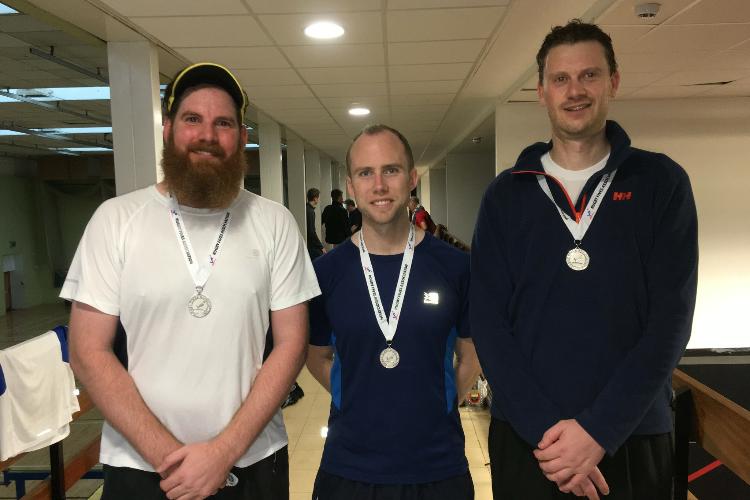 Runners-up for the second year in a row. But still smiling! 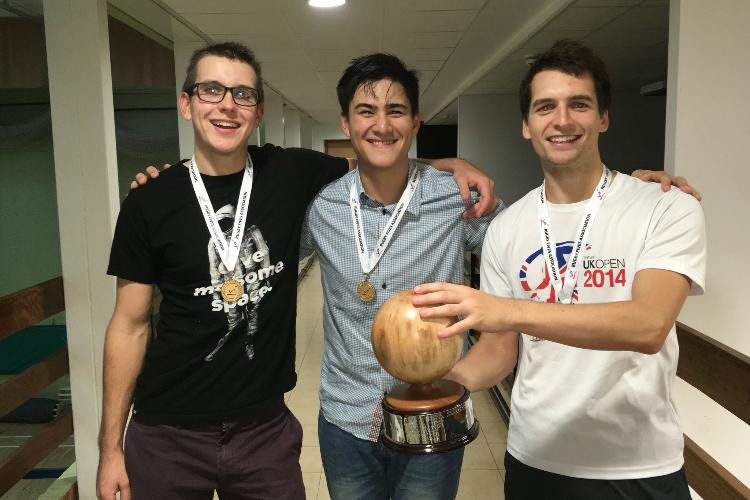 To the victors the spoils!