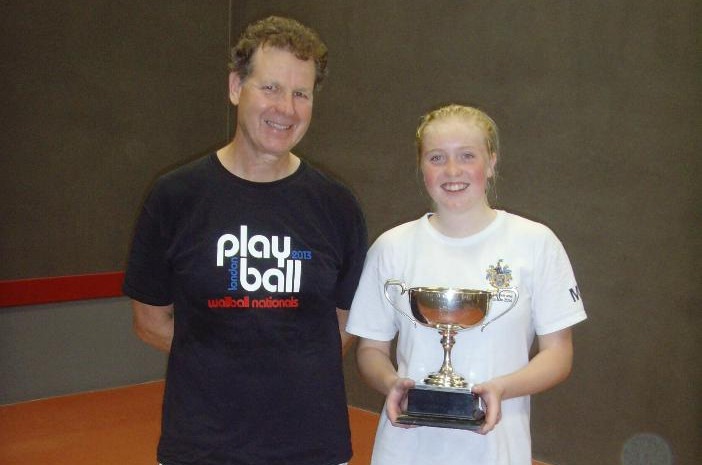 Ten pairs contested the inaugural Lady’s Cup, played on the courts at ‘New Portugal Place’, i.e. the Sports Centre at Cambridge University. There were four ladies who had never played before, and one player of each sex who had set foot on court just the once, a few days before. At the other end of the spectrum were Kathleen Briedenhann, the National Ladies Singles and Doubles champion, Jacob Ader, the Honorary Secretary of CURFC, Board member Alex Smith and his former pupil Tessa Mills, four-times National Girls’ champion, and Dick Warner, multiple silverware winner. Trevor White brought 5 players from Rugby School and also played himself. There were three young players from DerbyMoorFives. And two younger sisters joined in!

In the Mug (and Bowl) Jacob Ader and his partner from Pembroke College, Sienna Tompkins, prevailed over Alex Smith & Bee Richards. Bee and Sienna had never played before. The mugs and bowls came from an artisan potter in southern Burgundy.

In the Plate Kathleen and partner Robyn Schnuir reached the final by beating Trevor White & Georgia Martin (another débutante), while Lewis Keates & Emily O’Malley from DerbyMoorFives beat Tessa Mills and Rachel Snow from Cambridge University. In the final Lewis and Emily (a convert from EF, now studying at Nottingham University) amassed a 7-0 lead, only to see the more experienced Kathleen Briedenhann peg them back progressively and take the spoils, a silver salver and a plate each with a goat on (don’t ask!). Emily and Lewis each got an ‘I Love Paris’ plate.

In the main competition George Romain & Kate Broad from Rugby beat DMF youngster Hasan Rehman and his beginner partner from the University in one semi-final, while next door Rugby’s Kirsty Martin & Freddie Evans lost the best match of the day so far against Rugby’s top girl Milly Richards playing with Dick Warner. Then, in an all Rugbeian final, Milly and Dick won an even better game with George & Kate, carrying off the silver Lady’s Cup and all finalists receiving an egg cup crafted by another Burgundian potter. The match was a fitting conclusion to this event designed, above all, to encourage girls and young ladies to play the game and try their hand in tournaments. Everyone won, and deserved, a prize.