Katie and Joseph Sumner became the winners of the 3rd Lady’s Cup, beating Anastasia de Clermont and Tom Beal in the final after a round of group matches and two close semi-finals.

In the Beginners’ Event Alice Day and Alina Guna won Le Petit Pot by beating Liv Theaker and Trevor White after these four players emerged from a lengthy series of 21-rally matches. 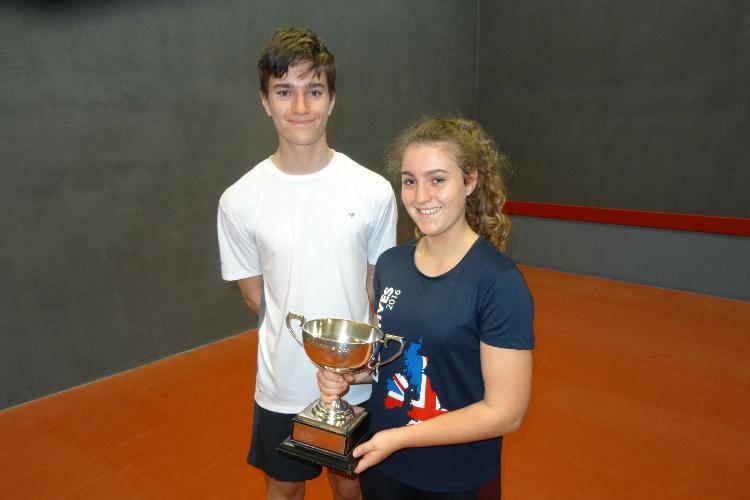 Joe and Katie Sumner with the Lady’s Cup 2016

21 players ranging in age and in experience met for this year’s Lady’s Cup, an event designed to encourage Ladies Fives at schoolgirl and university level. National champions Kathleen Briedenhann and Tessa Mills came to give the benefit of their experience in a competition where the only condition is that one half of the pair is a schoolgirl, recent school leaver or a beginner.

There were players from Cambridge University and Nottingham University, and from Rugby School and Bedford Modern School. This year no players were able to come from Aldenham School and Christ’s Hospital — we hope to see them able to compete again next year.

6 pairs contested the main trophy, the Lady’s Cup, while 9 others played a series of short games designed to produce a final in which the prize was Le Petit Pot, an item of pottery for each winning player.

In the Lady’s Cup siblings Katie & Joe Sumner from Bedford Modern School beat Rugby’s Anastasia de Clermont & Tom Beal in the final, while the Plate match between the losing semi-finalists — an all-Rugby affair between  Lottie Harbottle & George Terry and Freya Harrison & Jacob Drabble — went to Lottie & George. Lottie thus had the distinction of retaining the Plate which she won last year with Vlad Shirokiy.

In the match for the Lady’s Bowl Emily O’Malley (Old Olavians, Derby Moor and Nottingham University) & Tessa Mills (Old Eastbournian and University of Kent at Canterbury) had a little too much experience for the Cambridge University pairing of Georgina Shepherd & Cassi Henderson.

On Court Three the final of the Beginners’ event featured total beginner Alina Guna from Cambridge (when Cassi invited her to try her hand Alina thought she was entering a Rugby Union event!) played with Alice Day from Rugby. Their opponents were also from Rugby: master in charge Trevor White and another near-total beginner Liv Theaker. Alina & Alice came through a close match to win their trophies designed by an artisan potter in southern Burgundy.